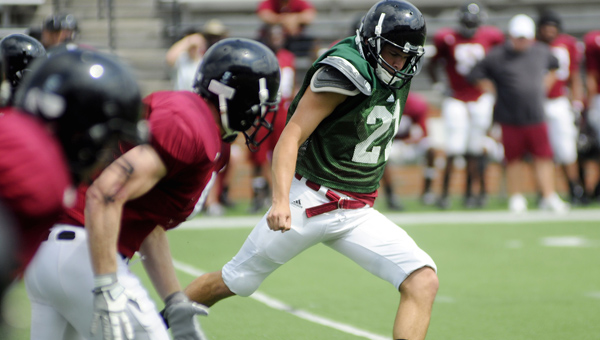 This is part five of a six part series previewing Troy football during the final week of spring practice. Look for part six in Saturday’s Messenger.

Very seldom is a team forced to replace its kicker, punter, and long snapper in the same offseason.

That’s exactly what Troy is looking to do, however, as team creeps closer to its final spring practice on Saturday.

“Replacing guys is never an easy thing to do,” special teams coordinator Shayne Wasden said. “What you have is an unknown factor. The guys we have are just as talented as the ones we just lost but they haven’t done it on Saturday’s for us yet.”

Troy signed Will Scott from Gulf Coast Community College and is the frontrunner as the team’s punter.

While at Gulf Coast, Scott was ranked the third best punter in the National Junior College Athletic Association while averaging 42.3 yard per punt.

“He’s come in a done a good job this spring,” Wasden said. “He seems to be a little further ahead.”

The NCAA approved change to the kickoff procedures for the upcoming season. Starting this fall the ball will be placed at the 35-yard line instead of the 30. In addition, touchbacks will come out to the 25-yard line as opposed to the 20.

With this change comes a change in philosophy.

“I would rather see the ball come out to the 25 than have to kick and cover, any day,” Wasden said. “If we can put it in the endzone, we will.”

Wasden said Scott, a junior, has shown the ability to kick the ball five to eight yards deep consistently and will get the first shot at kickoff duties as well.

Scott and redshirt freshman Jed Solomon will battle in the fall for the field goal and extra point job.

Freshman Ryan Kay and senior Spencer Martin could also find their way into the mix.

Jaquon Robinson will be the Trojans holder, though he has missed the entire spring due to injury.