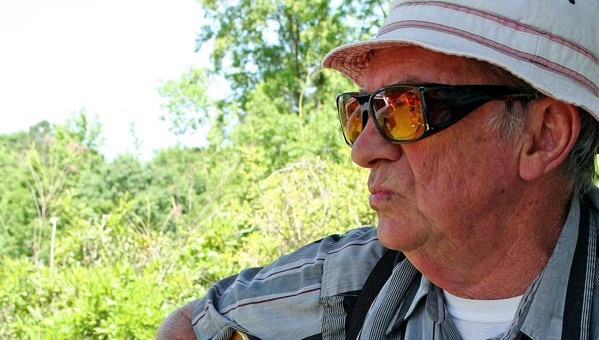 All was quiet at the Henderson Bluegrass Park at noon on Thursday, except for the distant strumming of a flattop.

“Most everybody’s eating or taking a nap,” said Rex Locklar, the Father of Henderson Bluegrass. “The ‘old’ father,” Locklar said. “I’m gettin’ too old for this.”

Rex’s Bluegrass Jamboree is in its 47th year and counting and, no matter what Locklar says, those who know him are 100 percent certain that there’s nowhere he would rather be than right slap in the middle of all the “goin’s on.”

Speaking on behalf of the thousands of bluegrass pickers who have found their way to Rex’s festival time and time again, Frank Deweese of Kentucky said it’s Locklar that brings them together each April and October.

“Oh, it’s our love and passion for bluegrass but, mainly, it’s Rex,” Deweese said. “He’s the reason that we’re here.”

Deweese said Locklar, with his laid-back demeanor, sets the tone for the Henderson Bluegrass Festival and it’s a tone that resonates with a lot of folks.

“It’s not so much what goes on at Rex’s festival that draws us here, it’s what doesn’t go on,” Deweese said. “At Rex’s Bluegrass Festival, everybody is somebody. We don’t have any heroes or superstars out here.”

On Thursday, the park was beginning to fill with RVs. They come early to stake their claims and Locklar said, come Saturday night, the park will be running over.

“I’ll have to work like heck to get ’em all parked,” he said, shaking his head. “When we get all the RVs in here and everybody else, you won’t be able to shake a stick at all of ’em.”

Bob Hedrick of Michigan is a first time “camper” at Rex’s Bluegrass Festival and, although he didn’t know quite what to expect, he is glad to be there.

“It’s peaceful and tranquil,” he said. “It’s a laid-back atmosphere. It’s not commercialized, that’s for sure and the music’s good.”

Hedrick said the folks are friendly and welcoming,

“You can play a while with this group and then walk over to another group and someone will say, ‘Get your bass and come on,’” he said. “You get to meet a lot of people and pick with people that play different styles.”

The different styles range from the bluegrass of Bill Monroe to bluegrass gospel, folk and “heaven help us not bluegrass rock.”

“I’ve gotten where I even enjoy a little Bill Monroe and Ralph Stanley bluegrass,” Deweese said. “I didn’t really get into bluegrass until I tuned the radio into the Barron River Breakdown and it was the purest, cleanest music I’d ever heard – bluegrass but a little more sophisticated. I was hooked.”

Whether bluegrass enthusiasts are like Deweese and have been coming the Rex’s festival for 15 years or more or like Hedrick and there for the first time, to a one they say that bluegrass is just better when it’s played with friends and they have no better friend than “old Rex.”

Rex’s Bluegrass Festival is tonight and all day Saturday and way on into the night. Admission is $5. Those who don’t have the price of admission can see Rex and he’ll let them work it out.