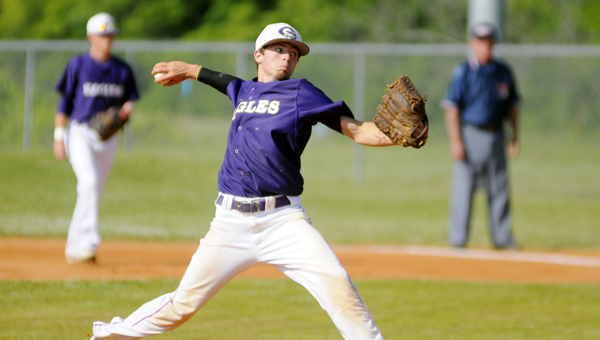 To call the Goshen Eagles’ baseball game against New Brockton emotional would be an understatement, as questionable play calls and the ejection of Eagles’ head coach Robby Kinsaul in the third inning played heavily into the team’s 4-3 loss.

The ejection of Kinsaul occurred when, down 2-0, the an Eagles runner slid into second base and supposedly knocking the New Brockton player down, resulting in the umpire calling a double play that ended the third inning.

“Our runner slid into second just like he was supposed to do but their player fell down and the umpire felt it was interference and it unfortunately probably cost us a run,” Kinsaul said. “It was unfortunate that it happened but that’s a part of the game.”

The resulting expulsion of Kinsaul after a confrontation with an umpire seemed to give new life to Eagles, who then proceeded to stage a rally to put themselves back in the game.

Three quick outs to open the fourth and the Eagles were back at bat, with pitcher Austin Rushing sending a message with a double.

Not long after Paul Messick, who would hit two doubles for the Eagles, capitalized on a dropped pop fly to take a double and bring in an RBI.

Designated hitter Jared Maddox would then drive in another run on a single to make it an even 2-2 game before Brockton could end the inning.

Just as they had dug themselves out of one hole suddenly the Eagles found themselves in another as New Brockton was able to take advantage of a single in the fifth to put another two runs on the board.

Down by two the Eagles were able to hold off New Brockton until they returned to bat in the sixth, where two back-to-back doubles by Messick and Rob Boutwell brought in another RBI to cut it to one.

Despite getting a man on third and in scoring position the Eagles were unable to tie the game in the remainder of the sixth, and three quick outs in the seventh capped of the tough loss.

“They fought, they competed and they did everything except win on the scoreboard.” Kinsaul said. “As a coach that’s all you can ask is for them to lay everything out there. I feel like we should have won today but it just wasn’t meant to be.”

Perhaps one of the biggest highlights of the Eagles performance was the pitching of Austin Rushing, who covered all seven innings of work for the team.

Rushing kept the New Brockton offense contained with 10 strikeouts and no walks, as well as putting in two doubles at bat.

“Rushing has been clutch all year for us,” Kinsaul said. “He’s one of those guys you can always rely on in a game. All of our guys are like that though I feel like we have a real advantage at pitcher and it showed well today. Austin was able to knuckle up and was a dominant presence for us.”

The Eagles will go on the road for their next matchup, a meeting with Leroy on Friday, April 20 in the first round of the state playoffs.