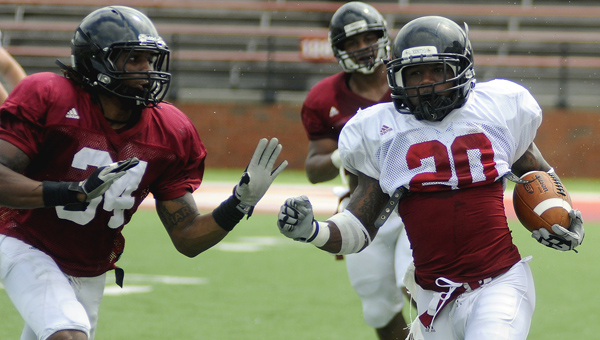 This is part four of a six part series previewing Troy football during the final week of spring practice. Look for part five in Friday’s Messenger.

Despite a sluggish performance in 2011, Troy’s offense returns the majority of its major parts, especially at the skill positions.

Corey Robinson will again take the reigns of the wide-open Trojan attack at quarterback. But offensive coordinator Kenny Edenfield is determined to compliment Troy’s air assault with a solid dose of hard-nosed running.

The Trojans will turn to a bevy of backs including seniors Shawn Southward, Chris Anderson and D.J. Taylor. Southward returns after leading the team in rushing a year ago, accumulating 556 yards while reaching the endzone four times. Taylor is the team’s bruiser. At 6-foot, 230 pounds, Taylor scored a team-high six times on the ground and rushed for 110 yards with a pair of scores in Troy’s T-Day game in March. Anderson is a change of pace from Southward. Last season, Anderson rushed for 217 yards and a score.

Also in the mix in the backfield will be converted wide receiver Khary Franklin.

“We’ve really stressed hard this spring on being more physical running the ball, breaking tackles, and blocking well on the perimeter,” said Edenfield, who enters his third season as offensive coordinator. “I think we have a little more confidence in the run game. We have a couple of backs where we can get into a two-back set and do some different things this year.”

One component that will benefit the run game will be junior tight end Jim Teknipp. The McDonough, Ga., native caught just three passes a year ago but could find his niche as a major contributor in rushing situations as an extra blocker.

“We feel like he’s going to be very effective,” Edenfield said. “He has gotten a lot better this spring and will play a role in our run game.”

Troy also welcomed the return of Jamel Johnson and Chip Reeves, who were both

ineligible last season due to academic issues. Johnson is a physical receiver at 6-foot-2, 217 pounds, while Reeves was considered one the Sun Belt Conference’s premier deep threats before becoming ineligible.

“Anytime you can get two guys with their skill set it creates a different kind of atmosphere,” Edenfield said. “Right now, it’s hard to play one-on-one with those guys out there.”

Worthy, in particular, has high expectations placed on him by the coaching staff. The sophomore may be a bit undersized at 5-foot-9, 159 pounds, but has a knack for finding opens spaces in the defense. After catching 22 passes for 392 yards and four touchdowns a year ago at the Y-receiver position, Worthy has been working at the H-receiver slot during spring practice.

“He’s picked it well. Those are very similar positions. I don’t think it will be any transition for him to play either spot,” Edenfield said. “He has really good speed. He is strong for his size and he is physical for his size. He has all the characteristics to be a good player.”

The Trojans will continue practice throughout the week before wrapping up the spring with a Saturday practice at Veterans Memorial Stadium at 10a.m.

The practice will not be a scrimmage as originally announced.