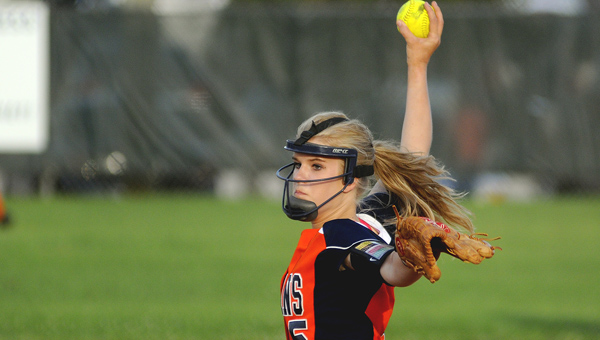 Past injury not slowing Motes

For many, being struck with a line drive in the face would slow the desire to return to the pitching circle. Charles Henderson eighth grader Meredith Motes took the opposite route. She jumped right back into the action.

Motes, a seventh grader at the time, was pitching for the Trojans junior varsity team in a game against Elba High School when she delivered a pitch that sailed off target. The batted ball stuck Motes in the face breaking a bone near her eye as well as her nose.

“I wasn’t really scared at first because I guess it knocked the common sense out of me,” Motes said jokingly. “I wasn’t wearing my facemask and it just caught me in the eye.”

After evaluation, it was determined that Motes could return to play after her eye and nose had healed with the condition that she wore her protective facemask. Two weeks later, Motes was back on the mound for the Trojans though with a little uneasiness.

“I was a little nervous,” she said. “I had two or three hit back to me in a tournament. I got used to it after a couple.”

Making the move to varsity this season, Motes felt a bit timid about pitching.

“We told her she didn’t have to do anything she didn’t want to do,” Charles Henderson head coach Robin Snyder said. “We wanted her and her parents to feel comfortable with what she was doing on the field.”

It didn’t take long before the itch to command the softball returned.

“It was about the second week of the season when she approached me about pitching again,” Snyder said. “I suggested she throw for the junior varsity team a couple of times to make sure she was comfortable.”

Motes never pitched for the junior varsity. Two days later, she again approached Snyder about pitching but this time for the varsity.

Snyder worked the right-hander into the rotation and ever since has been a significant part of the varsity squad.

“She is a very big asset,” Snyder said. “She still has some fine tuning to do but she’s doing a great job for us.”

As with any sport, Charles Henderson was forced to endue a string of injuries midway through the season.

The Trojans lost first baseman Olivia Hudson for the season with a torn ACL. Shortstop and pitcher Becca Hartley was also slowed due to a bout with tendonitis. Motes stepped in and filled the void in the circle.

“Meredith has been a gem for us of sorts,” said Snyder. “With the injuries we faced, she came in a plugged a gap at pitcher.

“I think about going out pitching strikes and getting back in the dugout,” Motes said. “I don’t want to thing about throwing as hard as I can or any of that. I just want to let my team do what they do and throw the best I can.”

Charles Henderson will return from spring break to face Dothan on the road today. Game time is set for 5p.m.