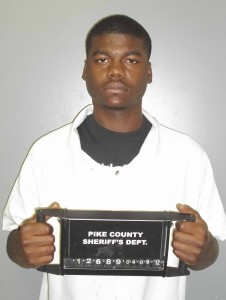 Troy University Police have arrested a man in connection with the on-campus armed robbery of a student on April 1.

Quentin Jermal King, 22, of Troy, is now in custody and being held on a $100,000 bond in the Pike County Jail. He is charged with first-degree robbery.

According to police, King was on probation for a previous breaking and entering charge when police detained him. Troy University Police Chief said it was the search for a suspect vehicle that led police to King.

“He is well known to law enforcement on the Troy University campus, as well as to the Troy PD,” McCall said.

McCall said University Police had issued a trespass warning to King two years ago after he committed crimes on campus. However, McCall added, this is the first violent offense King has been charged with.

Dean of Student Services Herbert Reeves sent a message to university students shortly before 10 a.m. Tuesday reminding them to be vigilant in their safety.

“While this suspect has been apprehended, I’d remind each of you that personal safety begins with individuals making themselves as resistant to crime as possible. Please continue to follow the personal safety guidelines and tips we’ve been stressing,” Reeves wrote in his message.

WATCH THE NEWS CONFERENCE WITH CHIEF MCCALL BELOW.

A little more than a week ago, a male student was walking down University Avenue near the Math and Science Complex at about 1:20 a.m. when he was confronted by a man with a gun who told the student to “give me everything you’ve got,” according to McCall.

Police reported the man made off with a wallet and cell phone.

The student told police the robber was a black male in his early 20s wearing a black hoodie and a scarf over his face. He said the suspect was about 6-feet tall and weighed about 170 pounds.

The student told police, even with the scarf over the robber’s face, he felt confident he could identify the man.

Police picked King up not far from his Brantley Mobile Home Park address at a location in Arrow Wood Estates Monday night.

And McCall had even more good news to share on Tuesday morning.

Troy University, through the Pike County Emergency Management Agency, was awarded a $32,000 Homeland Security Grant that will pay for four portable lights for use on the campus. That will bring the total to five for the university’s use in Pike County.

McCall said that portable lights on loan from several counties in South Alabama have already been placed on the Shackelford Hall Quad, by Wallace Hall, on College Street and on Sorority Hill.

“This grant will really help a great deal,” McCall said.