Troy looking for leaders on defense 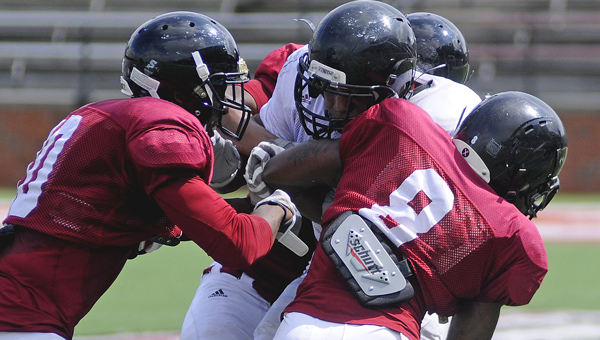 This is part two of a six part series previewing Troy football during the final week of spring practice. Look for part three in Wednesday’s Messenger.

Troy’s defensive unit may have experienced its share of growing pains in 2011 but with a new crop of talent and a renewed attitude the 2012 group is primed for improvement.

“I think this group will be better. How good they can be, I don’t know,” Troy defensive coordinator Jeremy Rowell said. “We’re heavy loaded in sophomores and juniors still but its good that they have some experience.”

In an effort to compliment the youth, Troy filled its openings with a heavy dose junior college signees. 11 new faces with junior college experience will wear cardinal and black for the Trojan defense this season.

Part of the goal in recruiting this season was to find guys who had the makeup to become leaders both on the field and off.

“Leadership is huge but it’s not made on the field,” Rowell said. “It’s made off the field when we’re (coaches) are not around. From off-season workouts to the classroom. The guys who take charge and do the right things that make them that type of player. Those things carry over to the field, to the game situations.”

Several returning players have stepped to the front of the line in the leadership category and will be leaned on heavily by both coaches and players. Defensive end Tony Davis along with linebackers Kanorris Davis and Brannon Bryan have shown the ability and willingness to lead the defense both on the field and off.

“They are the three most experienced guys on our defense but they do the right things and they go about things the right way,” said Rowell. “They have developed in this program and have paid the price to become leaders.”

Davis is making the move to defensive end after playing hte majority of last season at defensive tackle. Davis, at 6-foot, 249 pounds, was undersized on the interior line but depth issues forced him to adapt to the role. Now at end, Davis will be a key component in replacing Jonathon Massaquoi and John Robles.

Rowell is also making adjustment to the defensive scheme. The Trojans will continue to run its signature 4-3 look but with a twist. Linebacker Jacoby Thomas will line up opposite Davis as the fourth lineman in an effort to give Troy more versatility and mobility.

“He’s a guy that we’ve had high hopes for but he’s got to take the bull by the horns and make it happen,” Rowell said. “He’s got good ability but he’s good to get out there and prove it.”

The idea is to utilize Thomas both as a pass rusher and pass defender something the senior is excited about.

“We’re hoping to mix it up and cause some problems for offenses,” Thomas said before Troy’s T-Day scrimmage. “We know what we didn’t do last year and needs to be done this year.”

Thomas moved around quite a bit in Troy’s first scrimmage often lining up on the wide side of the field.

“We don’t have some of the parts that we’ve had in the past,” Rowell said. “It will be a little different. We’ve had to implement a few changes to get our best guys on the field. We want to be simple but also be multiple.”

The Trojans will also benefit from seniors Brannon Bryan and Kanorris Davis returning at the linebacker position. Bryan recorded 82 tackles, good for fourth on the team, while playing in all 12 games. Davis battled through nagging injuries last season and was eventually sidelined after dislocating his ankle against Western Kentucky.

Troy will continue on the practice field the rest of the week in preparation for its final scrimmage on Saturday. While the event will not be a full blown game, coaches are hoping to see players separate themselves in position battles.

The scrimmage is scheduled for April 14 at 10a.m. at Veterans Memorial Stadium.