Rowell: ‘A lot of things make a team, a team’ 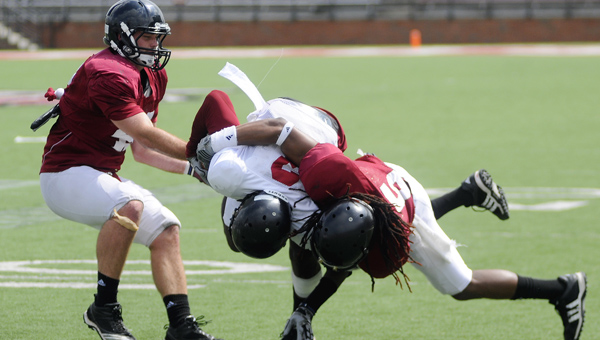 This is part one of a six part series previewing Troy football during the final week of spring practice beginning with a two part look at the defense. Look for part two in Tuesday’s Messenger.

There are few in the football clubhouse at Troy University that would like to forget about 2011 more that defensive coordinator Jeremy Rowell.

A 3-9 record and a defense that ranked 113th in the nation is something a coach would like to put out his mind. But Rowell is determined to pick up the pieces and build on the foundation he laid during the team’s run at five consecutive Sun Belt Conference titles.

“Actually, the last two years have been tough due to injuries and not having the same guys out there,” Rowell said. “Last year, we knew we would have some new faces in new places and had to change some things schematically.

I don’t think anybody was locked in to what their position required because of the sculpting we had to do week to week because of injury.”

The Trojan defense saw just four players start all 12 games in 2011. With a lack of depth, the player’s inexperience at their positions and the injury bug playing a role, the unit finished 101st in pass defense and 105th against the run.

“You could see it in a lot of games where we were fine in the first half then ran out gas in the second half,” Rowell said. “It was a big struggle for us. We’ve never really run into that problem before and it reared its head last year.”

While poor performance stood out on the field, the lack of chemistry was also a factor.

“It’s always a chemistry thing with a team,” Rowell said. “We lost a lot of guys (2010) that were team guys. There are a lot of things that roll in to making a team, a team.”

In an effort to build better chemistry and accountability, Troy implemented its Trojan Challenge program for the second straight year. The program was a semester long competition that used community service, class attendance, feedback from professors and work in the weight room to promote what head coach Larry Blakeney called the “Trojan attitude”.

“We’re trying to built toughness. Mental toughness and physical toughness,” Rowell said. “When you go through what we went through, you lose some of that toughness because this guys is out for three weeks then that guy is trying to play hurt.

It’s hard for the younger guys to learn from the older guys when they’re not there. You lose that loop.”

Rowell, who enters his 16th season with Troy and seventh as defensive coordinator, along with the Trojan coaching staff are in the midst of trying to reconnect that loop, the link between one team or player to the next.

“When this group of guys when have now got here there were a lot of guys who had been here a long time and built the program to where it is,” he said. “This group has to learn what it takes to get to that point and stay at that point.”

With a solid defensive recruiting class on campus, the Trojans may still have some rebuilding to do but the path is being repaved in the direction of a conference championship.