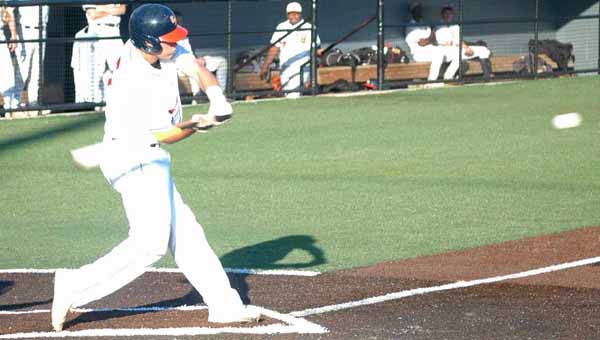 It didn’t take Charles Henderson long to jump all over Carroll High School.

The Trojans used a six-run second inning to knock of the area foe, 13-3, and lock up the Class 5A, Area 3 title at Riddle-Pace Field on Thursday.

Charles Henderson (19-4, 5-0) has laid claim to the top spot two of the past three seasons.

“Anytime you win a championship, it’s something to be proud of,” head coach Derek Irons said. “I feel good about the way we’ve competed.”

Houston Mabray (4-1) turned in yet another solid performance on the mound. The right-hander pitched the full five innings, allowing three runs on five hits. Mabray struck out three and walked one.

“Houston competed for us on the mound,” Irons said. “We swung the bats well and did what we needed to do.”

Posted on the wall inside the Trojans dugout at Frazier Field is a checklist of goals the team set for themselves prior to the start of the season. Very few of the goals are left unchecked.

“The only one that we haven’t been able to reach was Sikes Tournament champions,” Irons said. “Today put us at 19 wins and winning 20 games is one of our goals. We won 20 games last season and we wanted to eclipse that this year.”

Another goal Charles Henderson is looking to accomplish is advancing in the Alabama High School Athletic Association playoffs.

The Trojans were eliminated in the first round last season by Russell Count, a series they played on the road.

With the area title, Charles Henderson will host the first round series, which will match them against Russell County or Tallassee.

“Playing at home is huge,” said Irons. “We still have to play a good game tomorrow (against Carroll) so we’re not looking too far ahead.”

The Trojans got an outstanding showing at the plate from Joey Denison. The senior first baseman finished 3-for-4 and nearly missed hitting for the cycle. Denison singled home a run in the first, picked up a pair of RBI with a double in the second and blasted a two-run homerun in the third.

Chase Smartt was 2-for-2 on the day and reached twice on walks.

Charles Henderson will travel to take on Carroll today. Game time is set for 5p.m.