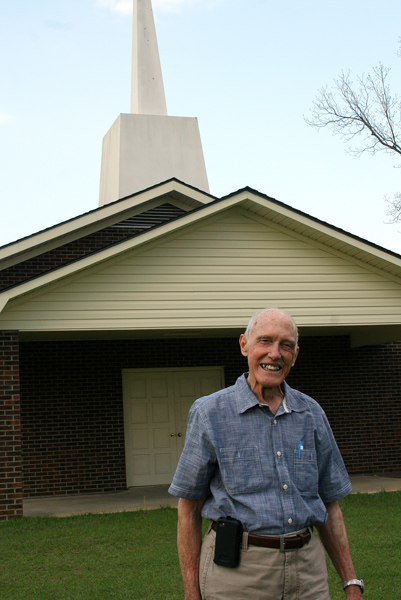 The members of Hale’s Chapel Baptist Church are growing in their faith as they grow their church.

Several members of the church sat scattered on the pews as they talked about their desire to see Hale’s Chapel grow and become a source of inspiration and a place of spiritual renewal for the community.

Confident at times, uncertain at others. They spoke of how it used to be at Hale’s Chapel, how it is and how it could be.

Their voices didn’t fill the sanctuary. So, there was a quietness as they talked in reverence of their church home and with, Cliff Matthews, the pastor who has been chosen to lead the way back to where it used to be.

Joe Floyd, a longtime member of Hale’s Chapel, pointed down the road to where the church was first situated on a settlement road and called Starkville Church.

The church was known to be “active” as early as 1887. A year later the church had 32 members. Around 1908, another church was built and was used as both a church and school.

“On October 25, 1925, a ‘cyclone’ destroyed the school/church and all records were lost,” Floyd said. “That left the community without a church building.”

Some members of Starkville Church then went to other churches and some met in homes for Sunday school. When weather was nice, Sunday school was held outside in a grove across the street from the old church site.

During this time of great struggle for the declining membership of Starkville Church, two Troy women, Irene Philley Freeman, a Methodist, and Ida P. Hale, a Baptist, became interested in providing aid, including financial assistance, to the church. Freeman donated the land on Highway 29 as the site for a new church and Hale remained a steadfast friend of the congregation.

In 1933, a new wooden frame church building was dedicated and named Hale’s Chapel in honor of Hale.

In 1979, the wooden church building was replaced as the church sanctuary with a new, modern brick building.

“Hale’s Chapel, like most all country churches, has struggled but it has remained active and involved in the community,” Floyd said. “But now, we’ve got a different kind of struggle. We’re back to growing a church.”

Floyd remembered how the people of the community came together to build a new church a reality and how these strong Christian families volunteered time and labor and made donations to the project.

He remembered their passion for building a House for the Lord. He remembered revivals when 20 people were saved.

Floyd looked around the sanctuary.

Fifteen is about half number of members that began what is now Hale’s Chapel, a church that has struggled and weather storms for more than 120 years. Matthews pastored Hale’s Chapel when it was housed in the wooden building and, when there were very few empty places on the pews. He is confident that Hale’s Chapel will not just survive as an “old country church,” it will grow.

“Hale’s Chapel is located in a small, close-knit community and we are dedicated and committed to meeting the spiritual needs of the people of this community,” Matthews said.

“Hale’s Chapel is a country church with traditional values and one that cares deeply about people. Now is a time of great opportunity for us to reach out and touch lives and that is our mission.”

Matthews said the church members are not standing back and waiting for people to walk through the doors.

“We have formed teams and we are going out in the community and talking to people about the Lord and inviting them to join us at Hale’s Chapel,” he said.

“We believe that there are those who want to come to church and feel the great need but are not coming because they are not invited. We are extending invitations to all who are looking for a church home to come and worship with us and be a part of growing Hale’s Chapel, a church that welcomes everyone as a Child of God.”

Sunday worship services at Hale’s Chapel are at 10:30 a.m. A special Easter service is planned and everyone is invited to come and celebrate the promise of Easter morning.