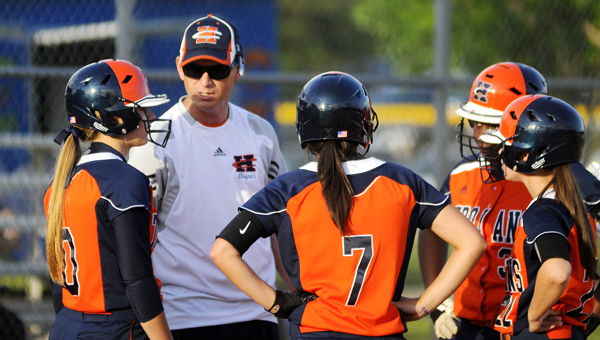 It was a frustrating night for the Charles Henderson offense. The Trojans left 11 runners on base despite racking up 14 hits in a 14-8 loss to Carroll on Tuesday.

Despite the loss head coach Robin Snyder has full confidence in his team’s ability.

“We had opportunities to win the ball game,” he said. “When you load the bases and come away empty, it’s hard to win.”

Down 3-0 in the second inning, Meredith Motes singled and later scored on a Carroll fielding error. Nikki Stephens and Madison Mehaffey followed with singles but would be left stranded.

The Trojans would allow a run in the top of the third but cut the deficit to one in the bottom half.

Victoria Outlaw led off the frame with a solo homerun. Motes scratched out a single sandwiched between two fly outs. Rondrea McBride, who finished the game 3-for-4, beat out a throw for an infield, RBI single.

Charles Henderson had a difficult time slowing down the Eagles 3 and 4 hitters. Kelsey Richman and Ashley Brown each finished 4-for-5.

With Carroll clinging to a 4-3 lead, Richman pounded a fastball over the left field fence for a 2-run homer. Brown followed with a single and would later score.

The next inning the duo doubled and tripled in succession to extend the Eagles lead to 10-3.

“When you have a lead like they did, you can be aggressive,” Snyder said. “They swung the bats well but we have to play better defense.”

Charles Henderson committed four errors on the night – all of leading to runs.

Mehaffey was 3-for-5 at the plate for the Trojans. Outlaw finished 4-for-5 while Motes was 2-for-3.

Charles Henderson drops to 1-1 in area play but will look to bounce back on the road against area foe Eufaula on Thursday.

Goshen scores twice on balks in seventh to win