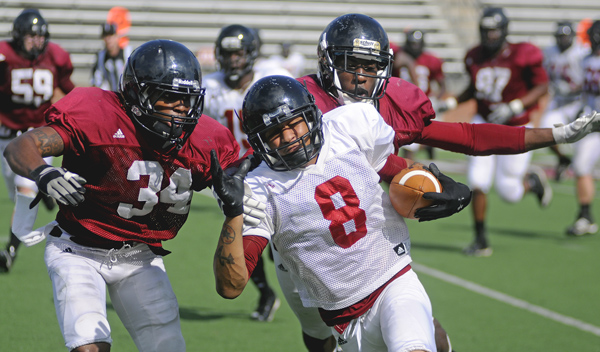 It didn’t take long for Troy’s offense to click. The Trojans scored on their first three possessions in the team’s T-Day scrimmage on Saturday as the White squad defeated the Cardinal 34-31.

D.J. Taylor scored from 35 yards out on the opening drive but he would be far from finished. The senior, who scored six times for the Trojans last season, rushed for 110 yards on eight carries and two scores on the day.

“We came out fired up,” Taylor said. “The energy keep getting higher and higher. Last year we had a lot of younger guys. Everybody came out today and competed.”

Quarterback Corey Robinson benefited from the return of receivers Jamel Johnson and Chip Reeves. Both, who sat out last season due to academic ineligibility, would catch two passes a piece for a combined 51 yards.

“I felt like we did some good things offensively,” Robinson said. “It’s good to get off to a fast start, that’s something we harped on all offseason.”

Junior college transfer Deon Anthony received the first reps as the number two quarterback and didn’t disappoint. The junior completed a 25-yard pass on a wheel route to Hakeem Haynie on the game’s second drive. The scoring opportunity was set up by a 67-yard kickoff return by Chandler Worthy.

After Taylor scored his second touchdown of the game to cap an 85-yard drive led by Robinson, Dallas Tidwell took over the offense.

Tidwell, who finished 6-for-7 for 96 yards, hooked up with Chris Williams for a 65-yard strike.

Though the offense stole the spotlight, Troy’s defense did show signs of life.

On the ensuing drive, Robinson faced a jailhouse blitz and made a throw off his back foot, which was intercepted by safety Bryden Trawick and returned 35 yards for a touchdown.

“We had a big play defensively,” Blakeney said. “Those are the types of plays that will win a game for you.”

The kicking game, which is in the midst of a fierce competition for the starting job, would dominate the remainder of the scrimmage.

Will Scott, expected to be Troy’s starting punter, booted through a 22-yard field goal while Jed Solomon nailed a 40-yard try later in the third quarter.

The Trojans will return to the practice field next week before heading to Phenix City for the second of three scheduled spring scrimmages on Saturday.

Trojans ready to strap on gear for annual T-Day…