Trojans ready to strap on gear for annual T-Day game 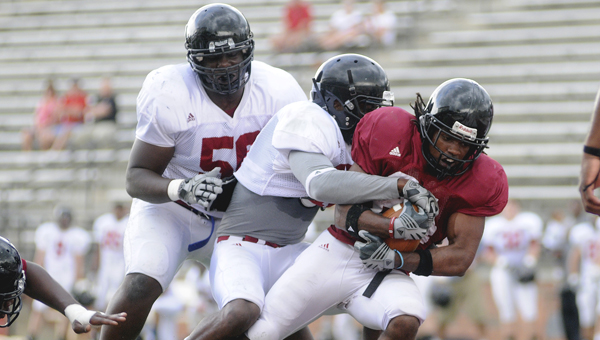 For many across the south, today is a special day – it’s T-Day.

T-Day marks the official starting point for the football season countdown. Fans can begin placing X’s on their calendars in anticipation for the first game.

“It’s always an exciting day, not only for the fans but for the players and coaches, too,” he said. “It’s a great weekend to come into town and see not only the football team, but the baseball and softball teams as well.”

The football team is looking to forget about last season in hopes of returning to greatness. The team’s streak of five consecutive Sun Belt Conference championships was snapped last year, but Blakeney feels the right attitude will go a long way.

“We’ve got a lot of new faces,” Blakeney said. “It’s all about doing things the Trojan way. These guys have a great attitude and go about things the right way.”

On a team that returns 15 starters, there is no lack competition for a starting role.

“We’ve got a couple of guys who would be locked in to a spot,” Blakeney said. “But for the most part, if you play better than the guy in front of you, you’re going to get a shot.”

Blakeney said he expects everyone on the team to get some work in the 100-play scrimmage.