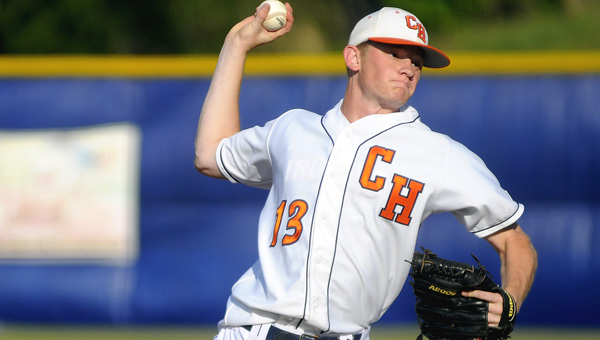 If Thursday was any indication of what this season’s Charles Henderson baseball team is capable of, opponents need prepare themselves.

The ninth-ranked Trojans pounded No. 4 Rehobeth, 10-2, in area action. The victory improves Charles Henderson’s overall record to 17-4 but more importantly bolstered its area mark to 3-0.

“Winning the first game puts you in good position to win the series but that’s it,” head coach Derek Irons said. “It doesn’t win you the series.”

The Trojans will travel to face Rehobeth in a doubleheader Friday. The winner of the series will put themselves in prime position to win the area title.

Houston Mabray pitched the complete game for Charles Henderson. After struggling in the first inning, the junior settled down and controlled the game.

“I had a little trouble with the breaking ball to start with but I settled in around the third (inning),” Mabray said. “Hitting spots is one of the biggest things we focus on and that’s what I was able to do.”

Mabray struck out just two batters but walked only one and benefited from several clutch defensive plays.

In the third inning with the Trojans leading 4-1 and Rehobeth threatening with runners on first and second and two outs, Seth Arroyo laced a single past second base and into the outfield. Charles Henderson centerfielder Gregory Barnette fielded the ball and fired a strike to catcher Chase Smartt, who applied the tag to end the inning.

The highlight reel was far from finished. In the fourth Alex Watson ripped what looked to be a clean base hit to leftfield. Trojan third baseman Luke Hastings made a diving stop to his left, sprang to his feet and threw out the runner at first for the first out of the frame.

The next batter, Brady Johnson, sent a quick roller down the third base line. Hastings would make a backhand grab and toss across the diamond for the out.

“It’s great when you make a mistake and you have guys out here picking you up defensively,” Mabray said. “They made some big plays out there today.”

Charles Henderson would add to its lead in the fourth with some solid two-out hitting.

Barnette, who finished 2-for-3, launched a solo homerun to left before Michael Fox drew a walk. After a pitching change, Jalin Lawson smashed a 1-1 fastball of the right field wall to score Fox from first.

Mabray would surrender a solo homerun in the sixth but the Trojans added four runs in the bottom half, three compliments of Joey Denison’s three-run homer, to cruise to the victory.

Charles Henderson will face Rehobeth Friday in a doubleheader at 5p.m.