Eagles return to gridiron in preparation for Purple and Gold scrimmage 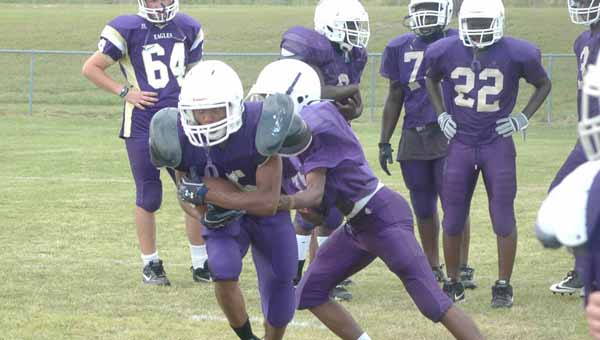 Goshen’s football team has been hard at work over the past week as the Eagles begin spring practice. The series of workouts will culminate with the Purple and Gold Game on April 5 at The Eagles’ Nest.

“We’ve got a lot of new faces,” head coach Bart Snyder said. “We have to replace a lot of good players from last year.”

The Eagles finished 7-5 last season after a second round playoff loss to Flomaton. Goshen is looking to not only rebuild a team but also build on past success.

“The team’s attitude has been outstanding,” Snyder said. “I am happy with the way we have practice set up. We are getting guys where they need to be so we can get the most views at a certain position.”

Goshen worked in shoulder pads and helmets on Wednesday with nearly 60 players participating.

Snyder expects to keep around 40 players on the varsity team with the remainder being reassigned to the junior varsity.

“We are very pleased with the number that we have out here this year,” said Snyder. “There are some young guys that will make an impact on this program down the road that we are excited to see. We’re out of equipment we have so many.”

While more equipment is on the way so is the beginning of a new season, something Snyder is anxious to see roll around.

The Purple and Gold game is scheduled for a 2p.m. start.