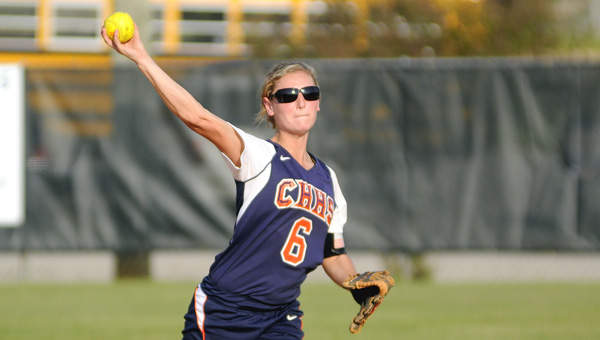 It was a game that begged for a hero. On Tuesday, Nikki Stephens played that role for Charles Henderson.

Stephens, a sophomore designated player, ripped a single into centerfield on a 2-2 pitch to score Brittany Williams giving the Trojans an 11-10 victory over Rehobeth High School.

“It felt good to help my team win,” Stephens said. “I wasn’t nervous, I was just trying to get a good pitch to hit.”

Stephens’ patience paid off as she drew two walks and was hit by a pitch in her three previous plate appearances. She would score on all three occasions.

In a game that saw five ties and six lead changes, Charles Henderson was able to answer every challenge Rehobeth put forward.

Trailing 3-0 in the second inning, the Trojans scored a run when Stephens drew a bases loaded walk. Madison Mehaffey followed with a two-RBI double to left-centerfield. Becca Hartley then lofted a fly ball to deep left field. The ball was caught in foul territory but was deep enough to give Charles Henderson the lead.

Rehobeth quickly tied things up in the third. The Trojans answered the following inning with three runs – two coming compliments of a Becca Hartley double. Hartley, who moved from shortstop to first base due to tendonitis in her throwing arm, drove in four runs in the game as she finished 3-for-4 at the plate.

Rehobeth scored five runs in the fifth to take a 9-7 advantage but Charles Henderson would again respond with a single run in the bottom of the frame on Amberlyn Baker’s solo homerun and three more in the sixth to regain the lead, 10-9.

The Rebels quickly tied the game in the seventh on consecutive doubles. In the home half, Williams reached on a fielding error for Charles Henderson before Kait Ross and Rondrea McBride reached on short singles to load the bases. Stephens then ended the game with a single through a drawn in infield.

“We fought through adversity,” head coach Robin Snyder said. “Our girls fell behind a battled back multiple times. They just persevered.”

With the win, Charles Henderson picked up its first area victory in as many tries. The Trojans will return to action on Thursday when they host New Brockton. Game time is set for 4p.m.