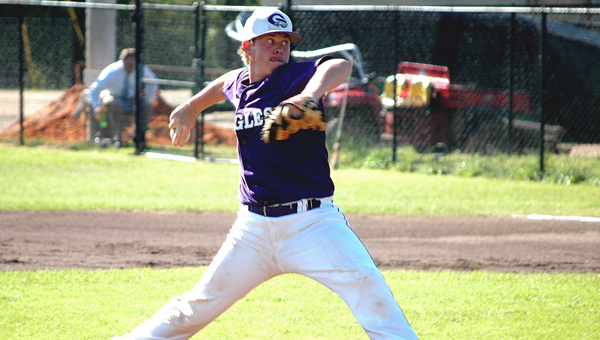 Goshen split a doubleheader with Luverne High School on Monday. The Eagles fell in the first game 4-1 before bouncing back to take game two, 5-4.

A strong pitching performance by Rob Boutwell was not enough to lead the Goshen to victory in the opener.

The Tigers broke a 1-1 tie in the fifth when pinch runner Kentarius Womack scored on Kentrell Jones’ single to left field.

Luverne took the lead in the first when Jones reached on an error and later scored on a Nic Manigle groundball to second base.

Goshen would tie things up in the third. Carlton Bean beat out a throw for a one-out, infield single. Bean, who finished the game 1-for-3, would steal second and take third on a wild pitch. Austin Rushing lofted a 1-1 pitch into left field for an RBI single.

The Eagles saw several scoring opportunities slip away in the first four innings. In all, Goshen left six runners stranded while failing to reach base in any capacity in the final three frames.

Boutwell would surrender two runs in the sixth but was solid throughout allowing four runs on four hits. The right-hander struck out eight while not yielding a walk.

Rushing was 2-for-3 on the day with a pair of singles.

Russ Thomas and Seth Lolley also had singles in the game.

In the second game, Jarrod Maddox tossed the full seven innings, striking out 13 batters in rout to earning the victory.

Goshen’s overall record now sits at 8-7 as the team prepares to travel to face Central Hayneville on April 2.