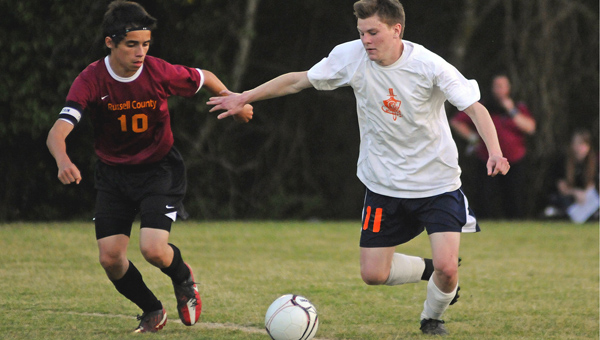 The Trojans struck first midway through the first half on a goal by junior Alexander Dorrity, who posted three goals for the Trojans, on a pass from Scott McClendon to go up 1-0.

The Trojans would follow shortly after following a free kick by McClendon that found its way to freshman Ben Salmon, which was followed up soon after on a long shot by McClendon to put the Trojans up 3-0.

After a big substitution by Russell, which brought in five new players including a new keeper, the Warriors were able to maintain their ground and force a penalty kick at the Trojan goal on keeper Nathaniel Salmon.

The Warriors punched in the penalty kick to get on the board as the Trojans brought in Scott McClendon to keeper in place Salmon, who was handed a yellow card and sent to the sideline.

The Trojans held on defense long enough to see Salmon return to the goal and run time out to see the end of the first half of play.

Despite the early lead Trojans head coach Olaf Lieb felt the team underperformed and were unable to keep control of the ball and make crucial plays.

“We didn’t do like I expected,” he said. “We were disorganized and didn’t take advantage of some situations. Defensively speaking we did alright but we couldn’t keep hold of midfield on offense. We weren’t following our usual play style.”

Back in the second half the Trojans wasted little time extending their lead on the heels of Dorrity, who managed to draw the opposing keeper out and send in the goal to make it 4-2.

Shortly after the Trojans had an opportunity for a penalty kick of their own, but were unable to get the shot as McClendon sent it straight to the keeper for a block.

As the minutes dragged on the Trojans seemed to drop their guard, evident by a quick corner shot by the Warriors to close the gap to 4-2.

Unwilling to let go of their lead the Trojans immediately answered back on a long shot from Dorrity, who sent the ball 25 yards to get the final goal of the evening and make it 5-2.

“I think we played down to our opponents level tonight and lost focus,” Trojans assistant coach Daniel Lawrence said. “We’ve still got a lot of work to do to get better as a team. But I will say our guys were taking more shots than usual tonight and linking passes so that was good.”

The Trojans will go on the road to face Andalusia on Thursday night, and coach Lieb feels that the team has a lot of improvements to make before their next match.

“We’ve got to work on controlling the midfield an offensive communication,” he said. “We’ve beaten Andalusia before and they’re a newer program but it won’t be easy. It shouldn’t be too taxing so it will give us a chance to work on our overall game.”