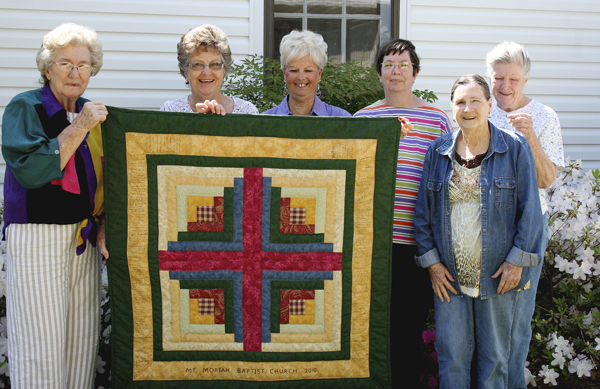 The Mount Moriah Quilters donated a log cabin design quilt block to the Brundidge Historical Society on Monday. The quilters participated in the Peanut Butter Festival in Brundidge and invited people of all ages to try their hand at quilting. Nearly 200 of those who put in a few stitches signed the border of the block. The quilters recently completed the quilting of the block. Pictured are quilters Ellene Keller, Mary Mitchell, Meble Horn, Judy Gail Windham, Teanie Walker and Martha Windham. (Photo/Jaine Treadwell)

Club seeks to revive the art of quilting

Not many ladies spend time sitting around a quilting frame these days.

So, to find a man sitting and stitching was a most unusual sight. And, because that man was a celebrity politician, people took notice.

The Mount Moriah Quilters laughed Monday as they remembered the stir that former United States Congressman Bobby Bright caused when he took a quickie-quilting lesson at the Peanut Butter Festival in Brundidge.

“He seemed really interested and said he would like to learn to quilt,” said Mable Horn. “Congressman Bright stayed at the quilting frame a long time and he did pretty good with the needle and thread.’

Martha Windham said Bright did much better than some novices.

“Some people that wanted to try quilting didn’t even know how to thread a needle,” Windham said, laughing. “Others would stick the needle straight down through the cloth and then try to stick it back up from underneath. I’ve never seen such stitching.”

The Mount Moriah Quilters participated in the harvest and heritage celebration in an effort to generate interest in the art of quilting and to let people try their hand at the fading art.

“Quilting was Greek to most of them,” Ellene Keller said, laughing. “But it brought back memories for those who had quilted before. Some remembered seeing their mothers and grandmothers quilt and wished they had learned the art.”

Many of those who tried their hand at quilting, successfully or unsuccessfully, signed their names on the border of the log cabin design quilt block. The log cabin block was designed for a quilt that was quilted by Mamie Carswell.

“Mamie had two more blocks than she needed so we used one of them to demonstrate the fundamentals of quilting at the Peanut Butter Festival,” said Carswell’s sister, Mary Mitchell. “Barbara and Glen Harris completed the quilting for us.

“The Brundidge Historical Society sponsors the Peanut Butter Festival that promotes many of the folkways. So we wanted to donate the quilt block to them to hang in the We Piddle Around Theater.”

“We will certainly find a place for the quilt block in the theater,” he said. “Quilting wasn’t considered an art by those who pioneered our country. It was a necessity. We thank Mount Moriah Church and the quilters, not only for the donation of the quilt but for helping the preserve the folk heritage of our community through their participation in the Peanut Butter Festival.”

The Mount Moriah Quilters always want a quilt in the frame. They will quilt piece tops for the public at $100 for a twin-size, $125 for a full-size, $150 for a queen-size and $175 for a king-size. The batting, lining and thread are not included in the prize.

The quilters meet from 9 a.m. until 2 p.m. on Mondays at the church about 10 miles north of Troy.