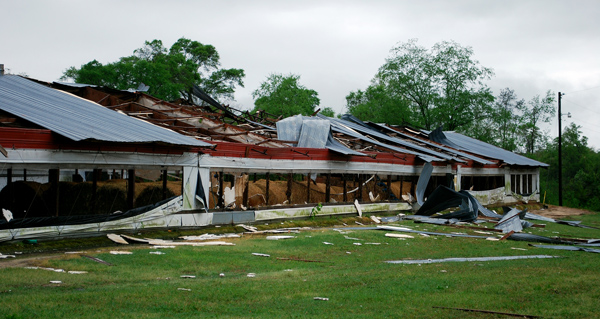 A damaged barn is seen after a suspected tornado touchdown on Oak Grove Road in Troy, Ala., Friday, March 23, 2012. (Messenger Staff Photo/Robbyn Brooks)

The tornado that skipped across property on Oak Grove Road in Troy Friday left as quickly as it came.

“It sounded like a train,” said Ruby McLeod. “A slow moving train. Then, it was just gone.”

Pike County residents received their first tornado warning at 8:59 a.m. The National Weather Service reported there was possible tornadic activity near Goshen moving northeast at 25 mph. By 9:30 a.m., reports of a tornado near the Troy Municipal Airport came into 911. The National Weather Service has confirmed that the storm produced an EF-1 tornado that had a damage path of 1.7 miles long and was 700 yards wide. The event lasted about 7 minutes.

McLeod and her son were home at the time the tornado passed through the area.

“It didn’t hit us,” McLeod said, “but we could see what was going on around everywhere else. We could see things flying.”

To see a photo gallery of the tornado damage on Oak Grove Road, click here.

Watch a video from the scene below.

McLeod said she was “lucky,” but several neighbors’ properties did sustain damage.

The back barn behind Robert and Marie Little’s home had roof damage and the chicken houses on their property had been twisted and mangled. Pieces of the tin roof and other building materials were scattered all over the yard, across the road and dropped in an open field.

“You think you have everything secure,” said Robert Little, “but the Man Upstairs showed us differently.”

“I was really surprised our house was okay,” Marie Little said as she looked around her property.

Their were no animals in the chicken houses, but several neighborhood dogs survived the storm and roamed through yards mid-morning.

First responders blocked off a section of the road while utility workers repaired downed power lines about 10 a.m. Trees had fallen on the roof of a mobile home and onto fence lines and against other properties on Oak Grove Road.

“Nobody’s hurt,” Marie Little said. “All of this is just material possessions and they can be replaced.

On top of tornado and wind damage, Pike County residents suffered from flash flooding in many areas and the county was under a Flash Flood Warning until 2 p.m. Friday.

Click here to see a photo gallery of flash flooding in Troy.

Watch a video of heavy rain in Troy below.

Gary Chinberg of Troy held on to his title as the best of the best when it comes to Irish... read more