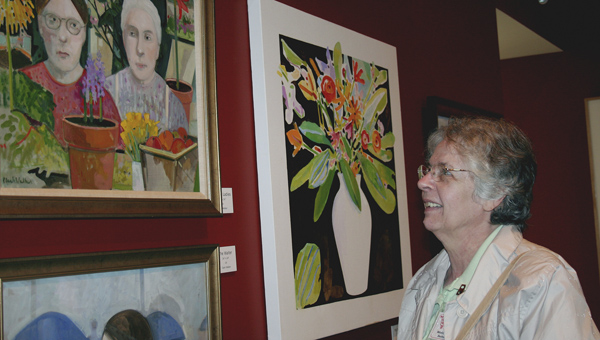 “Exquisite” is word that Morgan Drinkard, interim director of the Johnson Center for the Arts in Troy, used to describe the “Four Painters” exhibition now at the arts center.

“The pieces in this exhibit are exquisite,” Drinkard reiterated. “We have everything from landscapes to portraits to abstracts. Each artist has such a distinct style that is amazing to see them displayed together.”

The Johnson Center for the Arts is featuring the work of four Montgomery artists in its newest exhibit, Four Painters.

More than 40 works are on display from Richard Mills, George Taylor, Clark Walker and John Wagnon.

Drinkard said George Taylor feels compelled to capture and share emotionally charged images from his life much like the artists of the Lascaux caves.

“I paint exclusively in oils because they have an unequaled feeling of solidity, depth and chromatic intensity,” Taylor said. “Though I do occasionally work from memory, most of my pictures are painted en plein air because I prefer to be there, in the scene, to select the exact relationships and essences I’m after.”

As an art history fanatic, Taylor researches the issues of his craft endlessly.

“The subjects that I have chosen are fraught with meanings and associations for me,” he said. “Their appearance in these paintings is a synthesis of how they look to me and how I feel about them, filtered through the practical constraints of the medium. To this end, I freely appropriate techniques from many artists, styles and periods, which technically makes me a post-historical subjective realist.”

John Wagnon approaches each canvas as an individual case and solves its problems with whatever technique or medium seems to work for him, Drinkard said.

“Color is the actual subject of my paintings, no matter what the motif,” Wagnon said.

“I admire drawing in other artists above all other talents. I have spent many contented hours with a pencil and paper, however, it all seems to evaporate when I get back to the studio and squeeze out some color.”

In art, Wagnon is a “general practitioner” rather than a specialist.

“I approach each canvas as an individual case and solve its problems with whatever technique or medium seems to work,” he said. “

Wagnon said that he doesn’t have a formula that he applies to every painting.

“I’m as suspicious of that kind of painting as I would be of a salve that purports to cure any disease,” he said.

Richard Mills tries to find an aesthetic harmony in the use of hard- and soft-edged forms, Drinkard said.

“My work is executed by invention,” Mills said. “Occasionally, the invention leads me to include forms that are found in historical references and, at times, surreal humor. In any case, I’m only satisfied with the end result when I’m just as surprised by the work as a viewer who is seeing it for the first time.’

Drinkard said Clark Walker elaborates on his theme with the use of soft tones and dissolving planes of color, which project the solitude of the figures into their surroundings.

“The quieting effect of these introspective figures denotes Clark Walker’s ability to capture the atmosphere evocative of a daydream in is paintings,” she said.

Walker said that he elaborates on this theme by the use of soft tones and dissolving planes of color, projecting the quietude of the figures into their surroundings.

“I use a myriad of muted colored planes to describe my subjects and, with this multifaceted surface, the overall tonality gives a unity and calmness to the paintings,” he said.

Walker said a calming effect is instilled in the viewer by the unified brushwork, soft lighting and muted tonality.

“Through the aired scope of his paintings, the scene effects of Clark Walker’s work prevails,” Drinkard said.

George Taylor and John Wagnon are Montgomery natives. Richard Mills is a native of Knoxville, Tennessee and is now Professor Emeritus of Art at Auburn University at Montgomery. Clark Walker was born in Selma and now resides in Montgomery.

“We are really fortunate to have this show, said Wiley White, Center development and grants coordinator. “I’ve seen and watched these artists over the years and their work is impeccable.”