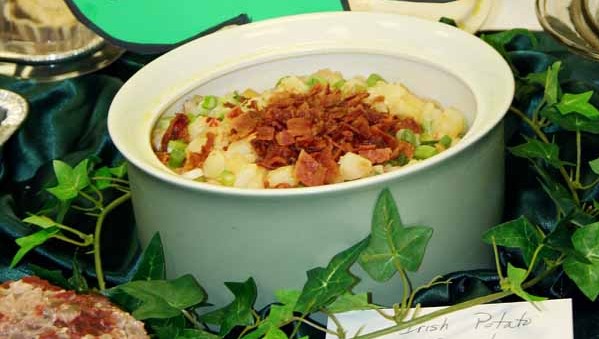 Gary Chinberg of Troy held on to his title as the best of the best when it comes to Irish cooking.

Chinberg went to great “distance” to retain the title at the Troy University Irish Cooking Contest at the Adams Center on Wednesday.

“I went to Montgomery and bought the lobster and dry ice,” he said. “By sprinkling water on the dry ice, I created a fog as a background for the dish.”

The lobster was set inside an amethyst geode that was cloaked in moss, creating the perfect presentation for his award-winning dish.

“I decided on lobster because I’ve entered the Irish Cooking Contest 10 times and I’ve almost run out of meats,” he said, laughing. “I’ve made dishes with crabs, salmon, lamb, scallops and brisket. I’ve made a beef spiced log and Irish potato and sausage soup. So, I had to find something different and lobster was different.”

“It was made with pepper jack cheese,” he said. “It’s an interesting and different tasting casserole.”

The extremely warm March day was a little more heat than Chinberg’s creamy-dreamy pie could take.

“It melted,” Chinberg said, with a chuckle. “But the taste was still there.”

For Chinberg, the annual Irish Cooking Contest is an opportunity to put his cooking skills to the test and his creativity on display.

“It’s a fun contest and hopefully it will continue to grow and attract the interest of people all around the county,” he said. “I enjoy it and appreciate the efforts of those who work so hard to make it a success each year.”