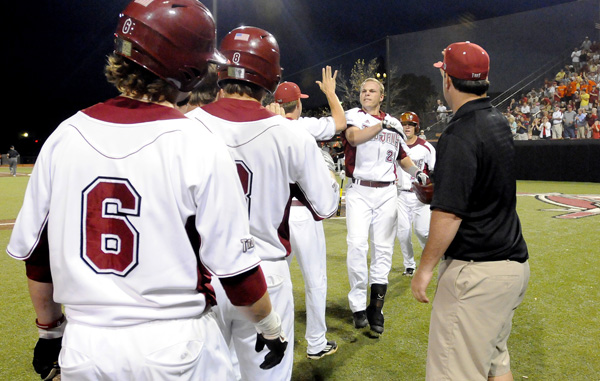 Troy, coming off a conference series loss to South Alabama, got a strong performance by Ryan Brady to defeat the in-state Southeastern Conference foe.

“Brady gave us a great start,” head coach Bobby Pierce said. “The approach I saw from out team tonight is what we’ve been looking for all season.”

After three scoreless innings, Troy got on the board with a four-run fourth inning. The Trojans (10-9) benefited from two Alabama errors with two outs. Cary Baxter, who relieved Crimson Tide starter Jon Keller, walked Logan Pierce and Danny Collins to start the inning. Boone Shear then put down a sacrifice bunt in front of the mound that was misplayed to load the bases.

After Chazz Otwell was inserted on the mound, Jakob Nixon grounded out to short to score the game’s first run.

A walk and a lineout later, Ali Knowles looped a soft liner to short that was dropped allowing Collins to score. Shear would later score on a wild pitch and Mathis crossed on an infield single from Golden to give the Trojans a 4-0 lead.

Danny Collins blasted a 2-run homer, his third of the season, in the fifth before Troy added another to extend their lead to 7-0.

The loss marked the first time since 2007 that the Crimson Tide have been shutout in a non-conference game.

“It was huge to have the fans here to support us,” leftfielder Boone Shear said. “It gives us confidence to go out and perform at the level we did tonight.”

Pierce is hopeful the team can point to the victory as a turning point in the season.

“This game is in the books and we have to move on and improve on this win,” Pierce said. “We have to use this to continue to build. Overall, I though we put it all together tonight.”

Pierce also commented on the turnout to the game.

“Our fans have always been good to us,” Pierce said. “We’ve had our share of struggles but tonight was a good night for all the Trojans.”

While All-American shortstop Tyler Hannah struggled at the plate going 0-for-5, the Trojans saw production from other sources.

Golden and Pierce were both 3-for-4 while Mathis finished 2-for-4 with a pair of RBI.

“We’ve been trying to get more guys involved in the offense,” Pierce said. “Some guys are starting to come on and see it better.”

Nate Hill worked 3 1/3 innings in relief of Brady before Tyson Workman came on in the ninth to close out the game.

The Trojans will travel to Arkansas-Little Rock to open a three-game conference series with a 6p.m. start on Friday.

With the sting of last year’s 3-9 season still lingering, Troy opened its spring practice on Sunday. The Trojans are... read more