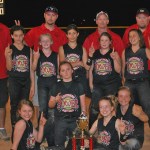 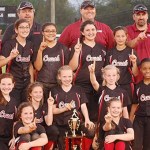 Troy Crush and Southern Power each won their age division tournament in the Souther Power Spring Clash held at the Troy sportsplex over the weekend.

The tournament consisted of 15 teams from Alabama and Florida.

Troy Crush won the 12&Under age division while Southern Power won the 10&Under division.

“We played four games in a short time span to win it all and the girls were really tired afterwards. We had four pitchers throw complete games; Molly Kate Sanders, Kassi Hester, Sydni Garrett and Haleigh Dewberry whose complete game was also a no-hitter in the championship game,” Armstrong said. “We also had timely hitting from Sidney Armstrong and Sydni Garrett in crucial spots in two games along with some power from Ashlan McCloud and Kelsey Gibson who each hit home runs. I am so proud of these ladies. It was a team effort all day and they did everything we asked them to do. They are all really special to me and I love coaching them.”

“The tournament was a successful fundraiser for the team, and also got them their first tournament win for the season,” Calhoun said. “Southern Power played four games on Saturday, and went undefeated for the day.”

Pike Liberal Arts defeated Crenshaw Christian 12-1 on Monday. Nick McLaughlin led the Patriots with a 2-for-3 performance at the... read more