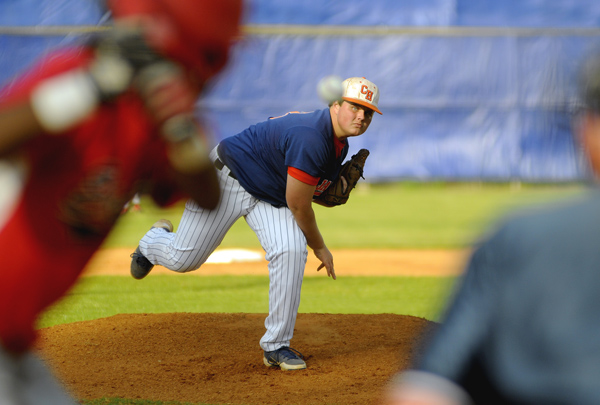 Despite an early lead and a strong seventh inning rally the Charles Henderson High School freshmen baseball team was unable to prevent a 6-4 loss to Carroll High School Tuesday night.

The Trojans jumped up early in the game with a run in the first inning, but soon found themselves in a defensive struggle with the visiting Eagles, with neither side being able to put runs on the board until the fourth inning.

The Trojans were able to hold off the Eagles early on, but a fourth inning run by the Eagles that resulted in four runs put the Trojans in a tough spot and behind 4-1.

Down three, the Trojans fought to get in scoring position, but were only able to get on base three times after the Eagle rally, twice by pitcher Charlie Tisdale on a single and a double and once on a Nick Lewis walk.

All of that changed in the seventh with the score 6-1 and the Trojans fighting to stay alive.

With one out for the Trojans and a man on second Lewis hit a double to bring in the runner and give the team its first score since the first inning.

On the very next bat Eric Lee brought another run in on a single, making it 6-3 and allowing Lewis to take third to get in scoring position.

After a strike out to give them two outs Tisdale stepped up to bat and despite starting with an 0-2 count managed a double for another Trojan run.

“We finally started taking some decent approaches at the plate and made things happen,” Trojans head coach Adam Helms said. “We couldn’t get things done in the early innings and we need to learn to get to work earlier in the game. We hit the ball almost every inning but just couldn’t seem to do anything.”

The Trojan comeback would get cut short however, when on a full count and two outs the Trojan batter struck out and the loss was final.

Despite the crucial fourth inning the Trojans were strong on defense, with Tisdale throwing four strikes before changing out with Hunter Blackmon in the sixth, who closed out the remainder of the game.

“Our pitching wasn’t bad tonight,” Helms said. “Tisdale did a good job and so did Hunter and our defense played well. We had some walks that hurt us and we gave up some base hits but overall the pitching and defense did well.”

The Trojans will be back in action on Thursday for a home double header against Enterprise. The first game of the double is set to begin at 5 p.m. at Charles Henderson High School.