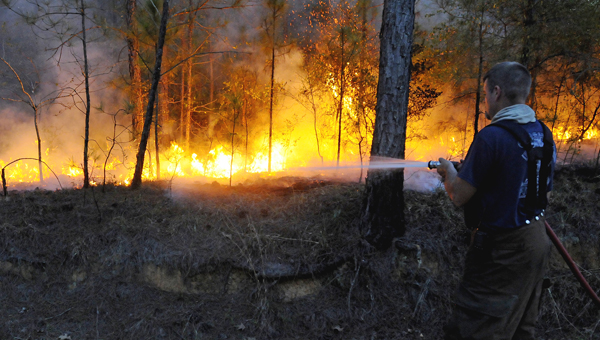 Acres of land ravaged by fire in Pike County

A duo of weekend fires ravaged almost 230 acres of land in Pike County.

“We were out there earlier today GPSing trying to determine the size of the fires,” said David Kelley with the Pike County office of the Alabama Forestry Commission.

The results of Kelley’s survey were a fire set to burn a pile of limbs got out of control and affected about 33 acres beginning Saturday afternoon and a fire of undetermined origin damaged another 194 acres on Sunday evening.

Jeremiah “Bull” Rodgers was at the scene and has been with the Forestry Commission many years. He said it’s been a very long time since Pike County has seen a fire of that size.

Both blazes were close to the intersection of County Road 1116 and 1124, both remote dirt roads, Kelley said.

Kelley reported that there were no homes endangered by the fire. He said the land held planted pines once owned by Georgia-Pacific.

The person whose burn pile grew out of control called 911 and the Meeksville Volunteer Fire Department, along with Pike County Fire & Rescue, responded to the fire.

“They are limited with what they can do, they can’t get too far into the woods,” Kelley explained.

That’s why the Forestry Commission also reported to the fire with a bulldozer they used to push through the woods and dig a trench around the fire’s perimeter to cut off the blaze.

“It’s the same procedure we use to control a wildfire,” explained Mike Kyser with the Montgomery County office of the Alabama Forestry Commission.

“We usually apply a line around the fire to remove the fuel and get the fire contained.”

First responders had the situation under control by 6 p.m. Saturday night.

On Saturday at about 5 p.m., 911 operators received a call about same location.

Firefighters from Meeksville, Banks, Goshen, South Montgomery County and Snowden volunteer fire departments, along with the Forestry Commission, responded to the second fire.

This time, bulldozers from the Montgomery, Pike and Crenshaw counties Forestry Commission offices were called to dig a trench around the expanding fire.

An investigator was scheduled to meet with the Pike County Forestry Commission Monday, but Kelley said no cause of the second fire had been determined.

Kelley said that lack of rain and increasing winds in March is a combination that could have firefighters battling even more flames.

“People need to be careful when they are burning piles of limbs and debris,” Kelley said.

“Scrape the area down to the dirt so that fire can’t spread, and don’t walk away. A lot can happen when you turn your back.”

It’s the season of sneezing and wheezing as yellow pollen covers cars and bright flowers bloom in yards all over... read more