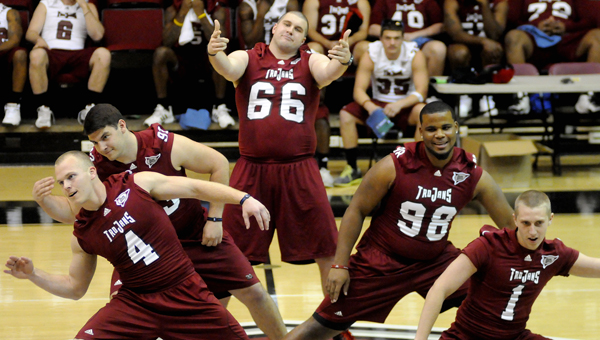 Troy University football players perform in the 'Dancing with the Stars' category during the 2012 Trojan Olympics in Troy, Ala., Thursday, March 8, 2012. (Messenger Staff Photo/Thomas Graning)

The five event showcase featured competitions in bench press, three-point shooting, slam dunk, touchdown celebrations, and even a Dancing with the Stars spinoff.

The event was the first of two Trojan Olympic days. The second will the hed on April 13 at Veterans Memorial Stadium.

“It is a part of what we’ve been doing all spring with the Trojan Challenge,” running backs coach Jeff Beckles, who organized the event, said. “We want to put them in a situation to compete and have fun at the same time.”

The event was open to the public with the highlight of the night being the Dancing with the Stars segment.

“I really enjoyed it,” defensive lineman Tony Davis said. “I’m not a big dancer as you can tell but it was fun.”