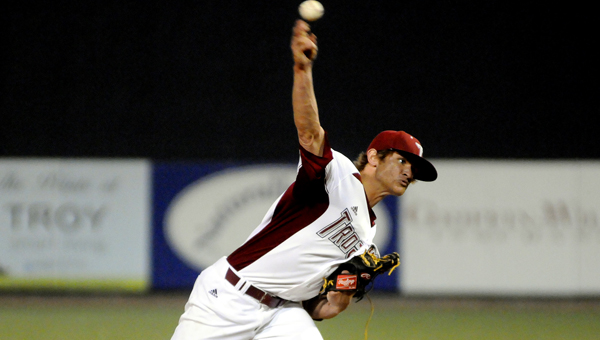 Troy bounced back from an error filled loss to UAB to defeat East Carolina, 8-2, on Wednesday.

Cass Abercrombie made the most of his midweek opportunity. The junior making his first start on the mound since nearly two years, tossed six solid innings allowing two runs on three hits.

“Tonight is about Cass Abercrombie coming in at a time when we needed a quality start and giving us more than that,” head coach Bobby Pierce said. “He only had trouble in one inning and wiggled out of that like a veteran.”

“He’s starting to believe in what he can do,” Pierce said. “You add confidence and belief to a good arm and you see what he can do.”

It was Abercrombie’s third appearance of the season and is hold opposing hitters to a .161 batting average.

“I just let my defense work,” Abercrombie said. “I didn’t think of it as a make-or-break thing, I just went out there and pitched.”

Pierce and Abercrombie both referenced slight changes to the right-hander’s off-speed pitches.

“We made a few adjustments and that seemed to help,” Abercrombie said. “I felt like my curveball made a big difference tonight.”

After a five-error performance on Tuesday, the Trojans posted a clean defensive slate for just the second time this season.

Austin Golden got the start at third base, replacing Danny Collins, who moved to designated hitter after committing nine errors in 11 games. Golden was 0-for-4 on the night but turned in seven assists.

Collins turned in another strong showing at the dish, batting 2-for-3 with three RBI to raise his average to .346 on the season.

The Trojans would score all eight of their runs with two outs including five in the second inning. Logan Pierce delivered a 2-RBI single in the frame to extend Troy’s early lead to 6-0.

“We got some big hits,” Bobby Pierce said. “We had some high expectations for our lineup and haven’t really seen it yet but seem to be getting closer the more we play.”

Freshman Jo-El Bennett would turn in an interesting stat line. Bennett was 0-for-1 with four walks, tying the Troy single-game record. He would score three times on the night.

The Trojans would tack on a run in each the fourth and sixth innings but also benefited from a sturdy showing from the bullpen.

The Trojans will face Monmouth in a three game series beginning Friday at Riddle-Pace Field. First pitch is set for 6p.m.