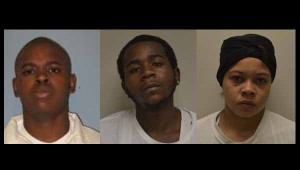 Three people were taken into custody Monday in connection with a home invasion.

Three people are in custody after a young couple and a home invader suffered injuries early Monday morning in Troy. The intruder remained in intensive care Monday evening.

At about 2 a.m., a man wearing a ski mask kicked in the front door of the victims’ home on Martha George Hall Drive and ordered them back into their bedroom at gunpoint, according to Troy Police.

There was a struggle between the three as the couple fought back against the robber. Police said during the ordeal, the husband and wife both received non-life threatening cuts and other injuries, but managed to stab Thomas White, III, 21, of Enterprise, multiple times.

“These two young people are alive today by the grace of God and their inner strength to survive,” said Troy Police Chief Jimmy Ennis.

When police arrived, the female victim told officers her husband was holding White down in the living room. All three were transported to Troy Regional Medical Center, according to police.

White suffered stab injuries to his back and legs and is at the hospital in the TRMC Intensive Care Unit. A police officer is stationed at the hospital to ensure White is kept in custody.

The male victim was released from the hospital Monday morning, but his wife was transported for further medical care in Birmingham due to a hand wound, police reported.

“They lived through something very tough,” Scarbrough said of the couple. “When you are faced with certain circumstances in your life, you can go into survival mode and I feel that is part of what helped these young people.”

Two other people were arrested Monday evening as accomplices in the crime. Police haven’t released how the pair is tied to the case, but Parrish Bean, 20, and Deanna McLeod, 20, both of Troy, are each charged with once count of 1st-degree burglary, two counts of 1st-degree robbery and two counts of attempted murder. Their bonds have both been set at $500,000 each, $100,000 for each count.

Detectives with the Troy Police Department are still investigating this case. They report the motive for this crime was robbery.