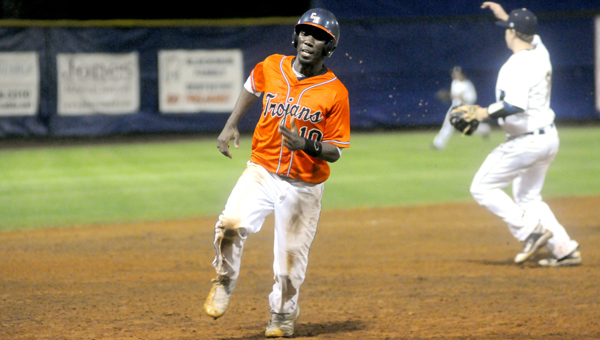 As a junior, Thomas saw little playing time aside from pinch running and coming in as a defensive substitute from time to time. Head coach Derek Irons said Thomas’ attitude never changed.

“He never complained,” Irons said. “That’s not who he is. He pulled for his teammates and did the job we asked him to do when called upon.”

Thomas has become a significant part of Charles Henderson’s talented lineup. Batting in the second spot of the order requires patience, a good eye and a team-first approach. Those are exactly the qualities Thomas brings to the table.

In a doubleheader against perennial power Stanhope Elmore, Thomas drew six walks and has been batting at a 76 percent efficiency rate, which is a stat Irons uses to track quality at-bats.

“He’s doing his job,” Irons said. “He practices with the same intensity he plays with in a game.”

Thomas credits his upbringing for his work ethic and energetic method to the game of baseball.

“My dad always talked about working hard and hard work pays off,” Thomas said. “It was one of those life lessons he taught me at a young age.”

Hard work paid off for Thomas and the Trojans in the season opener against G.W. Long. With Charles Henderson trailing 5-3 in the seventh inning, Thomas came to bat with the bases loaded and ripped a 3-RBI triple to give the Trojans the 6-5 victory.

“It was one of thing where I didn’t hear or feel anything,” said Thomas. “I was just trying to get to the next base and hope the runs scored.”

With success comes confidence but Thomas feels he must go out and create his own success and not wait on it to come to him.

Aside from the on-the-field success, Thomas has another, more personal reason for his work ethic… tradition.

“I thinks it’s beneficial to the team to see someone working hard,” Thomas said. “I want to leave with a championship ring but I just want to keep the winning tradition going at Charles Henderson and teach the younger guys what it’s all about.”

Nothing seems to have changed in Thomas’ approach. As Charles Henderson opened the annual Terry Sikes Memorial Tournament, Thomas continued to play his game, a game of patience and teamwork. Thomas reached base in all three tips to the plate and eventually scoring in the Trojans 13-3 victory over Dora High School. And yes, he did walk… twice.