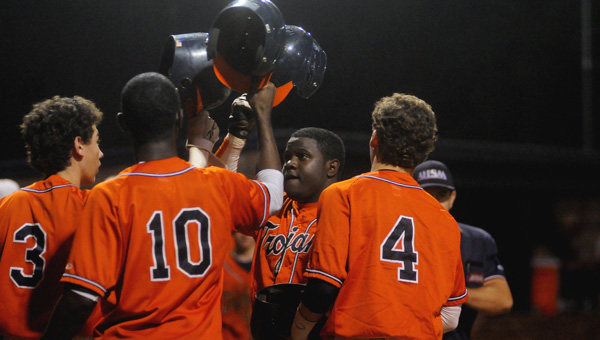 Charles Henderson got off to a good start in the Terry Sikes Memorial Tournament despite a two-hour rain delay.

With two games cancelled, the Trojans were able to fit in their opening round matchup with Dora High School.

Charles Henderson used a strong offensive performance to knock off the Bulldogs, 13-3, in five innings.

Jalin Lawson looked to get on the right track at the plate using his 3-for-4, four-RBI night to lead the Trojans.

CHHS jumped ahead early with three runs in the home half of the first inning. Joey Denison, Gregory Barnette and Chase Smartt all delivered RBI base hits in succession.

The Trojans would load the bases in the second before Dora went to the bullpen. The change didn’t pay off, however, as Jalin Lawson mashed a 1-out grand slam over the left-center field wall to extend the lead to 7-0.

The Bulldogs would allow three more in the third before Justin Shadix struck with a 2-RBI single in the fourth.

Charles Henderson claimed the runs back in its half. Chase Smartt lined a 1-out double off the wall in right-center, Tripp Blackmon quickly followed a double of his own in nearly the exact same spot. Blackmon would later score on a wild pitch. Smartt and Blackmon each finished 2-for-3 with a pair of doubles.

“We were looking to produce more at the plate,” head coach Derek Irons said. “I think we did that especially in the first two innings.”

Denison also finished with two hits, both singles. Barnette was 1-for-2 on the night. The Trojans pounded out ten hits all told.

Luke Hastings got the start on the mound and picked up the win pitching 3 1/3 innings. Hastings allowed two runs on seven hits.

The Trojans will face Northridge at 2p.m. tomorrow at Frazier Field.

ENGLISH: Linsanity caught us by surprise

By Jim English It’s not often that we get caught by surprise in the world of sports anymore. ESPN and... read more