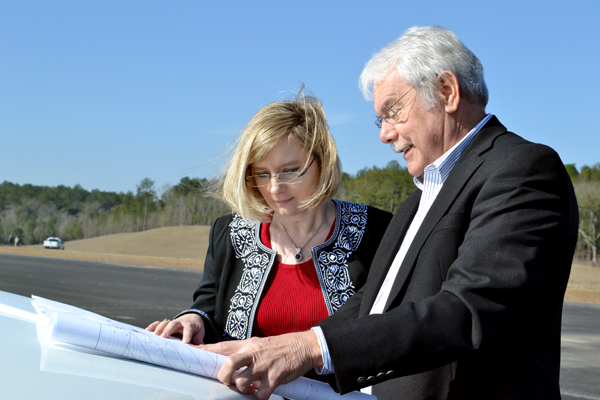 After a little research, airport engineers set to take over projects at Troy Municipal Airport have found a way to save Troy time and money.

In January, the city’s airport engineering group Barge Waggoner Sumner & Cannon, Inc. gave the city some disappointing news. Although they expected to complete the runway expansion project on time, the glide scope antenna that relays information to the $2 million instrument landing system at the airport needed to be moved.

Because of the topography of the land adjacent to the runway, truckloads of dirt would have to be brought in to level the land enough for the glide slope to work properly. The work would delay the airport project up to six months and significantly raise the cost of the project.

That’s no longer the case.

Troy Mayor Jimmy Lunsford said the construction and engineering firm poised to take over airport projects for the next five years has found a way around the problem.

Michelle Hunter, project engineer with Goodwyn, Mills, & Cawood, said the answer was not in changing nine acres of topography and moving the existing glide slope. Instead, she found a different glide slope that would work with the current layout of the airport runway and surrounding land.

“This product uses an antenna array, instead of the ground, to bounce the signal. It’s about five antennas in a row that sit 25-feet off the runway,” Hunter explained. “We can go in and put the antennas up with minimal work.”

Although numbers are preliminary, Hunter said, the new plan should save “a lot” of money for the city and the Federal Aviation Administration.

The mayor said that the fencing along the runway expansion is almost complete, asphalt is curing and the entire runway will be striped before Hunter and her team take over.

“We are currently working with the FAA on a time frame to get the glide slope in place,” Hunter said. “The runway is going to open as scheduled and that makes everybody happy.”