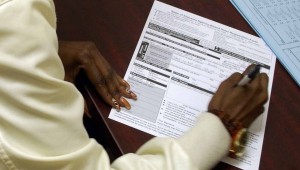 People in Pike County who want to vote in the primary election on March 13 have until Friday at 5 p.m. to register.

“It’s really easy,” said Pike County Board of Registrars Chairman Melissa Ingram. “The form is simple and you can print it at home and bring it in, or just fill one out here in the office.”

Candes Williams, who lives in District 3, filled out a voter registration form at the Registrars office in the basement of the Pike County Courthouse on Monday. She was in and out in less than two minutes.

Since January of this year, Ingram said the board has received applications from more than 600 potential new voters in the county.

“One of the biggest things we can do is vote,” Ingram said. “It’s one of the most important rights that we’ve been granted as American citizens.”

In September, the Alabama Legislature passed House Bill 425, which combined the dates for the Presidential Preference Primary and the regular primary election in order to save money by having one election.

Candidates who qualified for the March 13 primary have been visiting with potential voters in their areas and have encouraged people to register, and the Board of Registrars has also been active with outreach.

The board has visited Pike County High School, Charles Henderson High School, Goshen High School and Pike Liberal Arts School to speak with students and teachers about the voting process. On Wednesday, the Board of Registrars will be at Troy University at the Trojan Center from 9 a.m. to at least 2 p.m. to register anyone on campus who may not have already had an opportunity to fill out an application.

Ingram said the last-minute push to meet potential voters comes with an Alabama law that prohibits any changes to the voters list within 10 days of an election.

“Everyone has a right to vote,” Ingram said. “We just want to make sure people understand how important it is to exercise that right, and that it’s not too late to register.”

Ingram mentioned that elections affect everyone in some way, from jobs and taxes to healthcare to education and environment.

Pike County residents who register to vote after Friday will still be eligible to participate in the general election, but will not be able to cast their vote in the primaries.