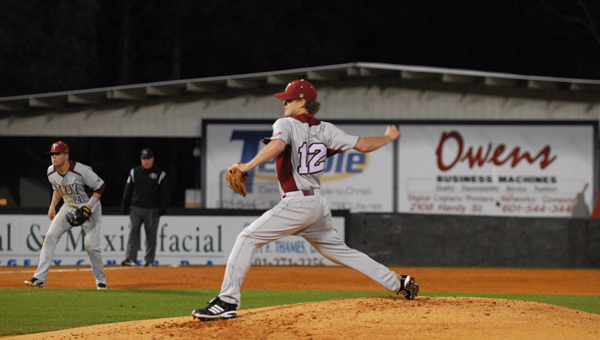 “We got what we get from Ray, another good performance,” head coach Bobby Pierce said. “The guy has been so good for us.”

With the win, Ray moves to 2-0 on the season and extends his streak to 14 consecutive victories. The senior, who also did not allow a walk in the game, is now just six wins from breaking the all-time Troy and Sun Belt Conference career wins mark.

Southern Mississippi advanced a runner to third just once in the game. With the Trojans leading 2-0 in the sixth, the Golden Eagles produced consecutive singles off Ray. A fielder’s choice moved the runners to second and third but a pair of fly outs ended the threat.

“You have to give him credit,” Pierce said of Ray. “He always seems to come up with a moneypitch with guys on.”

Troy (3-1) got to Southern Miss starter Chase Horn early. Tyson Workman, playing the field for the fist time this season, led off the game with a single. Two batters later, Boone Shear singled him home to give the Trojans a 1-0 advantage.

The move would pay off for Southern Mississippi. Jay Myrick, making his first appearance of the season, would strike out nine batters in 6 2/3 innings of relief.

“Myrick did an outstanding job,” said Pierce. “We had a couple of chances to bust the game open but couldn’t get it done.”

Troy would pick up an insurance run in the ninth on a bases load walk off Josh Rogers. 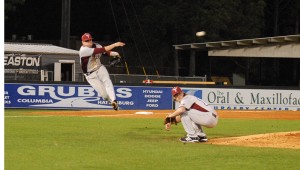 Danny Collins, the lone Trojan with multiple hits, was 2-for-5 on the night.

“I think he’s going to get better as the season goes along,” said Pierce. “We joke in the dugout that you could throw a dead cat up there and he’ll swing at it. When he gets his pitch, he can do some damage.”

Collins is 8-for-19 thus far this season at the plate.

Nate Hill relieved Ray to begin the eighth and tossed two innings of hitless baseball to earn the save.

“Anytime you can come in to Hattiesburg and get a Friday night win you’re happy,” Pierce said. “We’ll come out tomorrow and go for the series win.”

Troy will return to Pete Taylor Park today at 2p.m. for the second game of the three game series.

Left-hander Jimmy Hodgskin is expected to get the nod on the mound for the Trojans.

Jones back in starting lineup as Troy looks for…