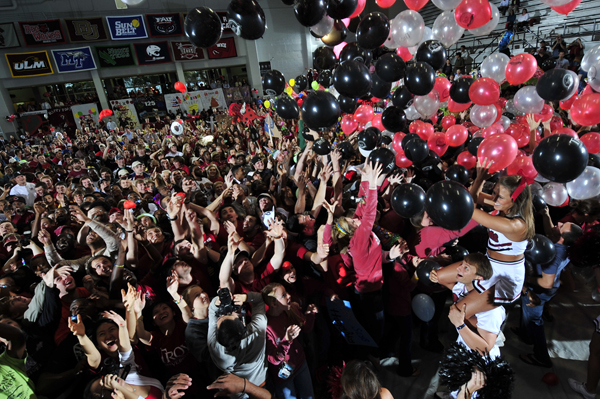 Troy University students catch balloons as they are dropped from the ceiling of Sartain Hall on the Troy Campus during a 125th birthday celebration Friday. Campuses in Dothan, Montgomery and Phenix City, as well as sites in other states and countries, participated in the simultaneous event that streamed live on the Internet. (Photo/Kevin Glackmeyer)

Despite a tornado warning , Trojans both past and present came together at Sartain Hall Friday to celebrate the 125th birthday of Troy University.

For a moment, it looked as if the weather was going to put a damper on the celebrations, as attendees were sent to the lower levels of the arena as the weather worsened.

But as the countdown clocked ticked down the weather cleared and the celebration resumed.

“I’ll admit I got nervous when we had the tornado warning right before the celebration,” said Darreyel Laster, Troy University SGA president and senior. “We told everyone to get to the bottom of the building just in case but everything came together once the warning lifted and we had a great turnout.”

The ceremony opened with a short address by university chancellor Jack Hawkins, who took time to reflect on the history of the school and the success Troy has had in recent years, stating that “we have become Alabama’s international university.”

After the speech the countdown clock ticked down to zero and hundreds of balloons descended on the crowd, several of which contained vouchers for prizes such as shirts, coolers and even TVs.

“I thought the balloon drop was awesome,” said Victoria Bailey, a Troy sophomore from Clovis, N.M. “I wish everyone could have gotten close enough to get something but it was a great idea and I’m glad to see so many Trojans out celebrating.”

With the celebration officially underway, the Troy students, faculty, trustees, alumni and fans cheered with the Sound of the South marching band as representatives of the school cut the ceremonial cake.

The spectators were then treated to videos of people wishing Troy University a happy birthday, many of which were sent in from Troy’s other campuses all over the world and even a birthday wish from Alabama governor Robert Bentley.

“This is one of those memories you never forget,” Hawkins said. “Fifty years from now students will still remember this day, we’ve had much to celebrate here at Troy. I’m very impressed with the turnout especially with the weather, but I’m so proud of the faculty, staff and students. The people who worked to make this happen are to be commended”

Perhaps above all else though, the celebration served as a reminder for everyone the importance the university has in the city of Troy and all over the world at its campuses.

But mainly it serves as a chance for the students to show their appreciation for the institution that helped them get an education, and built memories that will last long after college.

“It really is just a great moment,” Laster said. “Troy University has had many milestones and it’s great to be able to celebrate this event. Troy has solid programs and is a great institution and as the chancellor said it has great students. It really warms my heart to be here.”

Photo feature: A look inside