It was the second time in a week Anthony Lataris Duncan, 40, was arrested.

Duncan was picked up last Wednesday for violating a no-trespass order when University Police recognized him while he stood in front of Bibb Graves Hall on the Troy University Campus.

Duncan had been given a no-trespass order during the fall semester after a female student told University Police he’d approached her and made her feel uncomfortable. Duncan was hired by a temp agency to work at the University at that time. 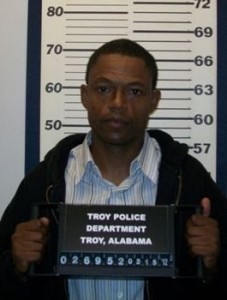 University Police Chief John McCall said, “We called him in and told him his actions were unacceptable.”

Duncan was released from the Troy City Jail last Wednesday on bond, but the Sheriff’s Office picked him back up Tuesday after obtaining a warrant for his arrest. Duncan had given University Police a home address inside the city limits where he was not registered.

After searching for the man for several days, deputies found Duncan at his mother’s home.

Sheriff Russell Thomas said that Duncan could be looking at a Class C Felony for being a sex offender and moving without permission.

“He will not be able to bond out until he provides us an address and we check it out,” Thomas said.