Jones back in starting lineup as Troy looks for momentum 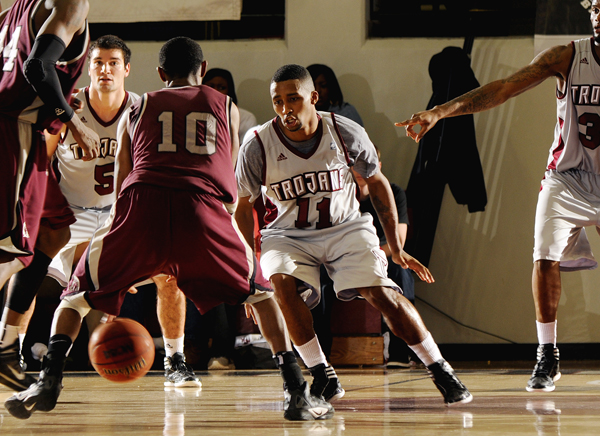 Troy men’s basketball team will look to salvage the final two games of the regular season before heading the Hot Springs, Ark., for the Sun Belt Conference Tournament.

The Trojans travel to the Sunshine State twice this week beginning with a matchup against Florida International.

The Golden Panthers defeated the Trojans, 63-50, on Feb. 2, holding Troy to its lowest offensive output of the season.

“Alan has been shooting well lately,” Maestri said. “We’re hoping he can have a good night and boost our offense.”

Jones, who has not started since Dec. 29, has had the hot hand of late coming off the bench. Over the past three games, Jones is averaging 14 points including a team-high 18 last week against Arkansas-Little Rock.

The junior also led the Trojans in the first meeting between these teams with 13 points as a non-starter. Jones was 5-for-11 from the field and 3-of-8 from three-point range.

Troy (8-17, 3-11 Sun Belt) is hoping to gain some momentum heading into the conference tournament.

“Winning makes you feel better, definitely,” Maestri said. “Middle Tennessee is obviously the team to beat but the tournament is still up for grabs.”

The Blue Raiders have dominated league play, cruising to a 13-1 mark and stand 24-4 overall. Their lone Sun Belt loss came Feb. 4 to Denver on the road.

Troy is coming off a disappointing 74-62 overtime loss to Arkansas-Little Rock on Saturday in the final home game at Sartain Hall. The Trojans have also lost six of their last seven.

Florida International (7-19, 4-10) has seen its share of troubles this season as well. The Golden Panthers have dropped their last four contests and are just 1-8 on their home floor this season. Troy, however, will need to improve to take advantage of that statistic as the Trojans are just 2-10 on the road.

DeJuan Wright leads Florida International with 15.6 points per game. Wright missed seven games earlier in the season with a sprained knee. Wright scored 18 in the previous meeting with Troy.

Currently, the Trojans would be the 11th seed in the Sun Belt Tournament, which begins March 3, but sit just a game behind Florida International.

Troy and the Golden Panthers are set to tip at 6:30p.m. CST.