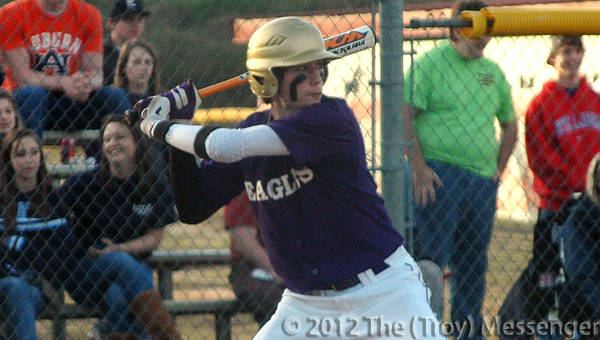 Opening day nerves seemed to play a big role in Goshen’s 8-2 loss to Zion Chapel Monday night, with errors in the field and at the plate causing trouble for the Eagles.

Zion Chapel was electric on the mound to kick off the game, with starting pitcher Samson Dismukes striking out four of Goshen’s batters in the first two innings.

Dismukes was on the mound for six innings and combined with some solid fielding managed to keep Goshen off base until the fourth inning.

“Pitching was outstanding for us,” Zion Chapel head coach Lucas Davis said. “Dismukes pitched six innings and was definitely on tonight. He was high on some throws but still was pitching good and he’s definitely one of our top pitchers.”

The Rebels were able to capitalize on a slow Goshen offense, which struggled on the field and committed several early game errors, to post four runs before Goshen could score on a hit by Maddox that brought in Bean.

“We had trouble with a lot of little things,” Goshen head coach Robby Kinsaul said. “It may have been first game jitters but we had a lot off errors off the plate and on the field. But it’s the first game and we’ve got a long way to go we’re working on getting better every day. Baseball is a sport where if you don’t play good one day you just have to go out and play better the next.”

The bottom of the fourth saw Zion Chapel hammer in what would be the final blow for the game, loading the bases and then bringing in four runners over three singles to put it out of Goshen’s reach at 8-1.

The Eagles would get on the board one more time in the game, with Rushing running in after a quick single by Bean, but despite toughening up on defense and holding the Rebels at eight points were unable to stage a comeback.

The loss gives Goshen a 0-1 start to the season as they get ready to go on the road to face Pike County on Tuesday, Feb. 21.

“Pike County is always a rivalry,” Kinsaul said. “I think the world of their coach and they have a good program so it will be interesting playing them. As for tonight we’ve got to work on hitting curveballs and hitting the ball where it’s pitched.”

Zion Chapel will also get to hit the road for their Tuesday match against Brantley, where they will hope to keep a perfect record and continue their success on the mound while perfecting the rest of their game.

“I thought we had some base running errors and some mental errors,” Davis said. “We had some physical error as well but you can correct that in practice, we’ll go and get some reps and drills in and work on our base running especially. Tonight gave us a chance to see where we really are and get in a good game before Brantley.”

Both teams will play on Tuesday with Goshen starting at 4p.m. and Zion Chapel starting at 3:30 p.m.