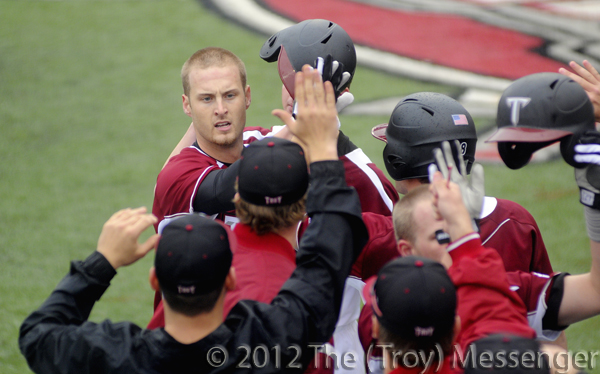 After taking the first two games of the series, Troy fell to a red-hot Central Michigan offense, 14-7 in the series finale Sunday at Riddle-Pace Field.

The Trojans defeated the Chippewas, 12-10, in the resumption of the second game of the series which was delayed from Saturday due to rain.

Troy held an 8-7 lead in the bottom of the fifth when play was halted as rain began to fall. The Trojans built a seven run lead heading into the fourth before Central Michigan fired up the bats. Troy starter Jimmy Hodgskin allowed two runs in the fourth before being run in the fifth. Sam Russell delivered the major blow in the inning with a 3-run homerun to tie the game, 7-7. Hodgskin gave up seven runs, five earned but struck out seven in 4 1/3 innings.

Boone Shear, who finished the game 2-for-5 with four RBI, quickly reclaimed the lead for Troy with a solo blast to lead off the home half of the fifth. After the Trojans loaded the bases with one out, the game was stopped. Troy didn’t wait long after play resumed to add to its lead. Josh McDorman tripled with two outs to clear the bases. It was a welcomed highlight for McDorman after striking out six times in the first two games.

Troy would allow three runs in the seventh before Nate Hill and Tyson Workman shut the door in the final two innings to preserve the victory. It was Workman’s second save in as many games. Reliever Joe Hernandez earned the win with two innings of work.

Central Michigan scored early and often as they salvaged the finale of the rain-shortened series.

“He has pitched better than that,” head coach Bobby Pierce said. “We’re going to have to improve some things this week but the first time out you never know what you’re going to get.”

Purdy, a transfer from Florida Gulf Coast Community College that originally signed with Auburn, exited the game after throwing 38 pitches in the opening inning.

The middle of Troy’s lineup did its best to keep the team in the game. Tyler Hannah, Boone Shear and Logan Pierce, the Trojans 3-4-5 hitters, batted 7-for-12 with six RBI while the rest of the order hit just 2-for-25.

“We had some new guys look really good but we’ve got to get some other guys going,” Pierce said.

One guy Pierce was happy to see get off to a strong start was his son, Logan. The first baseman was 5-of-12 for the series with a homer and five RBI. He blasted a 3-run homerun in the ninth of the finale that impressed his head coach.

“I though he put a good swing on a fastball that their pitcher had been throwing by some other guys,” Bobby Pierce said. “It certainly looks like he is a lot more comfortable starting out this season than last.”

The Trojans will take the week off before hitting the road to face No. 29 Southern Mississippi. Troy took two of three from the Golden Eagles last season at Riddle-Pace Field.