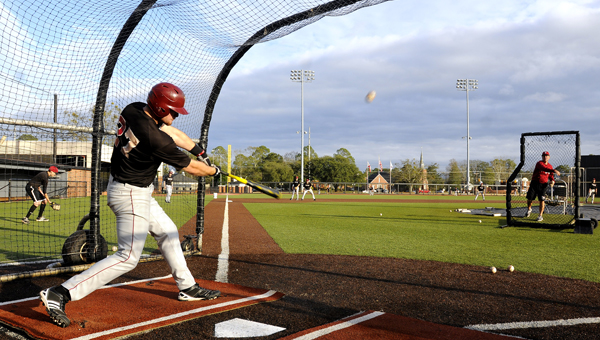 After recording the most home wins in the history of the program last season the Troy University baseball team is ready to start fresh with a four-game home opener against Central Michigan this weekend.

The Trojans will play Michigan on Friday with a double header on Saturday and a final game on Sunday.

“We’re excited about it,” Trojans head coach Bobby Pierce said. “Our guys have been working since August and we’ve finally gotten to game week and opening day. Our guys have done a good job of preparing for the season and we have high expectations.”

The Trojans will be returning a good deal of talent to the field, most notably in All-Americans Tyler Ray and Tyler Hannah, the former of which is only eight wins shy of breaking both the Troy and Sun-Belt career win records.

“We’re fortunate to return two All-Americans in Tyler Ray and Tyler Hannah,” Pierce said. “It’s always nice to have guys like Ray to start a season at pitcher for you and have Hannah right behind him at shortstop. We’ve got lots of players returning who have improved their game and new guys who’ve worked hard to get ready.”

The Trojans may have their fair share of talent, but they still have a tough challenge ahead of them in Central Michigan, who won the MAC championship in 2010 and took their division last season.

“They’re returning some experienced players and their top four hitters,” Pierce said. “They’re going to be well coached and well prepared so a four game series with them will be a tough challenge. We plan on playing a high number of our people this series so that when we get closer to conference play we can set a stronger lineup.”

The Trojans will be seeing a good rotation of players in the series, most notably at pitcher.

The Trojans will start game one with senior Tyler Ray on the mound, followed by sophomore Jimmy Hodgskin for game one on Saturday and junior Adam Purty for game two and closing with junior Chris Fisher on Sunday.

“We like our pitching staff this season,” Pierce said. “We’ve got more depth than we’ve had in the past, more left/right options and our bullpen is much stronger than in past seasons so going into a new year we feel really good about that.”

Perhaps one of the biggest uncertainties that will play into this weekend’s games is the weather, which could possibly bring rain and delay or even outright cancel some of the games.

But despite the possibility of rain coach Pierce isn’t worried about it affecting the Trojans game plans.

“In baseball we’ve been through it before,” he said. “On our playing surface the amount of rain isn’t a concern but thing like lighting or continuous rain could stop a game but hopefully with our surface we can get back out there and finish all four games without a problem.”

Aside from the challenge of opening with a strong opponent in Central Michigan the Trojans will also have to contend with their first double header of the season on Saturday, a scenario which could be trying on a team right out of the game.

“Two nine inning games is a long day,” Pierce said. “Some of our players, especially those from junior colleges, have done it before but some people don’t realize just how stressful that can be. But for us we’re happy Central Michigan agreed to play four games we can get our starters out and check our bullpens and see what we can do.”

The Trojans will open the season at Riddle-Pace Field on Friday at 6 p.m. followed by a double-header starting at 1p.m. on Saturday and a final game at noon on Sunday.