Any year or event that ends in zero is considered a milestone. So, The Pike County Steer and Heifer Show will reach a milestone on Saturday, March 3 with its 70th annual steer and heifer show.

Grant Lyons, Pike County Extension coordinator, said that, over the 70 years, hundreds of young people have competed for the titles of Grand and Reserve Champion and for showmanship awards.

“Not all of the competitors took home awards but they were all winners,” Lyons said. 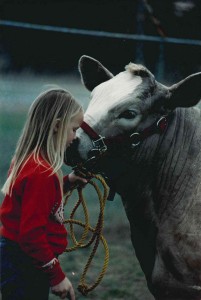 Ammie Waters Thompson with Sam, the fist steer she showed at her first Pike County Steer Show in 1989. (Submitted Photo)

The time and effort invested in raising a show steer or heifer is tremendous and takes a year round commitment, not only from the young people but also from their families.

“Raising show calves involves the entire family and a total commitment,” Lyons said. “At the 70th Annual Pike County Steer and Heifer Show on March 3, we want to recognize all of those who have been involved in the show over the years. So, everyone who has been involved in any capacity is invited to come and celebrate 70 years with us.”

The pre-show hamburger supper will be at 5 p.m. and the calf show will begin at 6 p.m.

“This year, we have eight young people from around the county that will be competing and we hope that everyone will stay and enjoy the 70th Annual Pike County Steer and Heifer Show,” Lyons said.

Not only will Ammie Waters Thompson be there. She will be there with bells on.

Thompson began showing calves when she was eight years old and, if she had her druthers, she would be in the ring when the show turns 70.

“I have loved cows for as long as I can remember,” Thompson said. “We lived near Michael Goodson and his family raised show calves and I fell in love with them. My love blossomed and I’ve loved cows ever since. I still love cows.”

Thompson said her parents, Mike and Susie Waters, supporter her and later her brother and sister, Carson and Jennifer, every step of the way.

“Raising show calves has to be a family commitment,” Thompson said. “It’s a year round commitment and it’s a daily commitment. It doesn’t matter if it’s 10 below zero or 110 degrees, the calves still have to be fed.”

“We turned the calves out at night so they could exercise,” she said. “In the morning, we had to bring them back to the pen to be fed, washed and brushed. After school, it was to do over again but, in the afternoon, we put the fans on the calves to train their hair to grow. Many afternoons, we walked them and trained them to set before we turned them out of the night.”

Thompson spoke in “plurals” because she said, raising calves involves the entire family and, because she raised “calves.”

“We worked as a family but I had much of the responsibility and I wanted that responsibility because I loved everything about raising and showing calves,” she said. “I showed a lot of steers and accepted that they were being raised for the market.”

Thompson always had her eye on the prize – that of Grand Champion  — and, even when she came in last in a couple of shows, she was not discouraged.

“I wanted to do better and I knew I could do better,” she said. “I would just have to work harder.”

And work harder she did — and longer.

Thompson showed calves that had been purchased in Oklahoma and Texas but it was a $900 Alabama steer that won the title of the Alabama State Grand Champion.

“Fred was the cheapest steer that I ever showed,” Thompson said. “He wasn’t much in the green stage but my dad had an eye for a steer’s potential.”

The Waters family had moved to Henry County and that’s where Thompson’s dream of a championship came true.

The year was 1995 and Thompson was 15 years old. She had placed second to her friend at several shows but her hopes were high at the state show in Montgomery.

“I didn’t even think the judge had looked at my steer,” she said, with a smile. “When he started to tell about the steer he had picked, he said that this steer looked like a big teddy bear that you wanted to hug. He was talking about Fred.”

Thompson said she cried and kissed her steer and cried some more.

“In that one moment all of the hard work paid off,” she said.

Thompson won many awards in showmanship and with other steers but nothing equaled the exhilaration and satisfaction of a job well done, like that one crowning moment.

Her sister, Jennifer, won the Alabama State Steer Show in 2000 and brought the state title to Pike County for the first time.

Thompson said she would not take anything for the time she and her family shared while raising and showing calves. And, if she could, she would be back in the ring today. But, as it is, she is grooming her two-year-old son to follow in her footsteps and his baby sister is waiting in the wings.