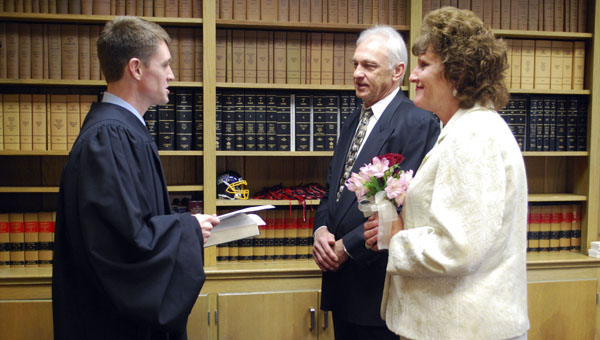 Wendy and Danny Calhoun were the first of five scheduled weddings for Pike County Probate Judge Wes Allen on Tuesday. "It's just a sweetheart day," said the bride. (Photo/Robbyn Brooks)

At 9 a.m. on Valentine’s Day, Wendy Hester walked in the probate judge’s office. At about 9:10 a.m. the same day, Wendy Calhoun walked out.

Wendy and Danny Calhoun were only one of the couples to tie the knot on Cupid’s holiday in Troy. Probate Judge Wes Allen said he had five weddings scheduled for Feb. 14, 2012, at the Pike County Courthouse.

“It’s just a sweetheart day,” Wendy, 50, said before she and her partner of two years exchanged their “I dos.”

Both live in Brantley but are moving to Troy, Danny, 58, explained.

There was no time for chit-chat with the pair Tuesday morning as they were bound for their honeymoon.

“We are going to Mississippi,” Wendy said with a laugh. “Ain’t no telling what we’re going to get into.”

Allen said of all his duties as probate judge, weddings are some of the warmest moments he witnesses.

“These are special days for me. These are some of the best things we do,” Allen said. “Weddings are wonderful, but are also serious business and we take it seriously.”

Second on the list to take the plunge Tuesday were Barbara (Biebinger) and Jeffrey Cotton, both 43.

“Two years ago we got engaged on Valentine’s Day,” Jeffrey said.

The couple decided just last Friday that this holiday would be the day they said their marriage vows.

“I feel lucky to have her,” Jeffrey said.

Jeffrey and Barbara met during separate evenings out on the town in Atlanta seven years ago. The couple moved to Troy for Barbara to work on school and spend time as a graduate teaching assistant in the biology department at Troy University.

Although they both said they were happy to be wed, they already had the ultimate love for each other.

“And I still love my Jeff,” Barbara said.

Love in the air