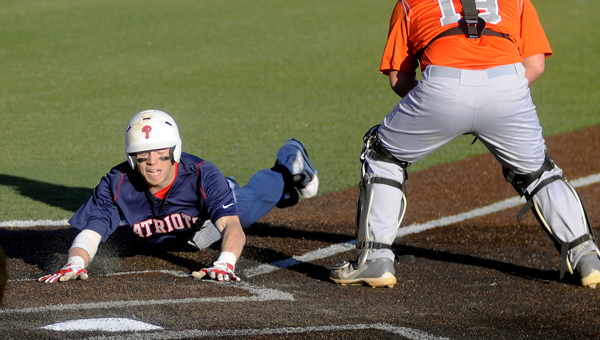 Pike Liberal Arts 6-0 win over Glenwood to open the 2012 baseball season may not have healed all the wounds of the past two season but it sure helped.

Pike and Glenwood have battled it out in the AISA State Championship Series the past two years, with the Gators winning both, and are primed to meet once again this season.

The Patriots and the Gators kicked off the season at Riddle-Pace Field for the second consecutive season and Pike earned a little retribution. Behind the solid pitching performances of Lawson Stewart and Josh Starling, the Patriots no-hit the two-time defending state champs en route to the shutout.

With South Alabama signee Kyle Rovig on the mound, Glenwood looked to have the upper hand early. Rovig struck out eight batters in just three innings of work but was matched by Pike’s Lawson Stewart.

Stewart struggled early in the contest, allowing Glenwood to load the bases in each the first and second inning. The right-hander worked himself out of the jams, however. In the first inning with the bases loaded and one out, Stewart struck out the Gators number six and seven hitting to end the threat. Stewart then forced a ground out with two outs in the second with the bases again full.

“I think nerves got to me early,” Stewart said. “I just needed to calm down and hit my spots.”

Stewart would retire Glenwood in order in the third before giving way to Josh Starling in the fourth. Pike’s starter would finish with four strikeouts but also walked four batters.

The Patriots had an opportunity to get on the board early when Stewart singled up the middle with one out and Nick McLaughlin followed with a walk. Rovig retire the next two Pike batters to end the inning.

The Patriots were held in check until the fifth when they finally broke through against Glenwood reliever Matthew Kuhlenberg. Designated hitter Reed Dickey led off the inning with a single to right. After Dustin Newman sacrificed him to second, Chandler Avant laced the first pitch he saw in the straightaway center and against the wall for a triple, scoring Dickey from second.

Pike would quickly add to its lead as Stewart’s groundball to second plated Avant, giving the Patriots the 2-0 advantage. With two outs, Blake Floyd lined a single down the left field line. Left fielder Will Allison allowed the ball to slip under his glove and roll to wall allowing McLaughlin, who reached on after being hit by a pitch, and Floyd to come all the way around to score. Pike would end the inning with a 4-0 lead.

Dalton Harris added a run in the sixth with a RBI double.

“It always good to beat a team like Glenwood. It gives us a lot of confidence,” Starling said. “Playing them is like the Red Sox and Yankees. You always look forward to playing them.”

Stewart was the lone Patriot to record multiple hits. He finished 2-for-4.

Pike will have a week off before returning to Riddle-Pace to take on Edgewood Academy. Game time is set for 3p.m.