Love in the air 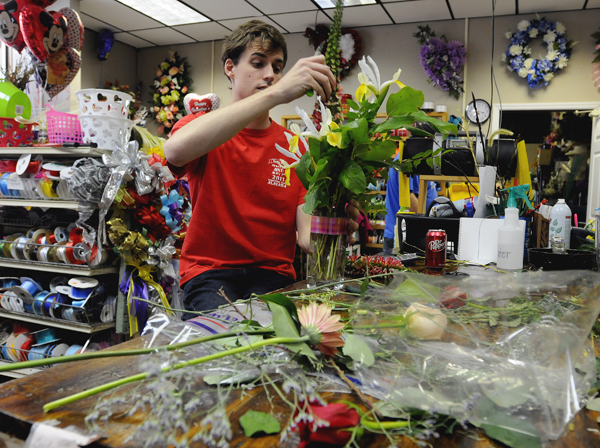 Love is in the air this Valentine’s Day, or at least the sweet smell of flowers that represent love is.

Even though Valentine’s Day is the same day each year, people were rushing around Monday morning to find a florist who could still deliver their sweetheart pretty petals on Feb. 14.

This year, the big seller at Maxine’s Flowers & Gifts was a dozen roses.

“The orders really started coming in Thursday and Friday of last week, but today’s been really busy, too,” said Ashley Tillery, manager of the store.

Tillery said orders were up a little from last year, but she felt that the reason was that the special day fell on a weekday this year.

Courtney Oliver at Jean’s Flowers & Gifts said that calls for Valentine’s Day flowers had gotten pretty heavy on the eve of the holiday.

“We did have several pre-orders, but most of the calls have come in today,” Oliver said, adding that sales for the shop were up from two years ago, but about equal to last year.

Oliver said that she didn’t know if the store would be able to offer same-day delivery if an order was placed on Feb. 14. It depended on the number of orders placed on Monday.

A good thing to remember when shopping for flowers on Valentine’s Day is to be flexible, Oliver said, and think outside the box.

“We also have tulips, daisies, carnations, snaps, and some beautiful calla lilies right now,” Oliver said. “Not all women are rose girls.”

The average amount spent at Maxine’s for Valentine’s Day arrangements is about $100. The number ranges between $50 and $80 at Jean’s.

While some couples are celebrating their love with gifts, others are ready to take their partnership a step further this Valentine’s Day.

Pike County Probate Judge Wes Allen said there are five couples who are set to wed at the courthouse Tuesday.

“We usually have a few, but this is a little more than the usual,” Allen said.

While the ceremony is the same as one on any other day of the year, Allen said he thinks some couples are looking for an interesting story to go along with their nuptials.

Allen said those who are looking to tie the knot on Valentine’s Day usually call as much as a month in advance to make sure they can get on the calendar.