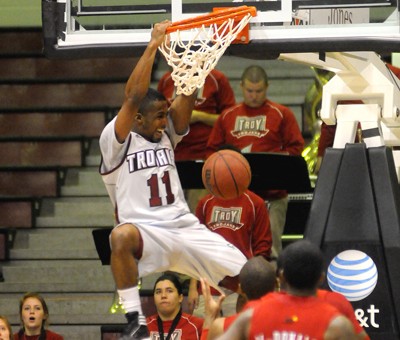 At 5-9, Alan Jones may not look like he can jump. He proved otherwise in Troy’s 83-77 victory over Western Kentucky on Saturday.

The junior guard picked off an errant Hilltoppers pass with 11:39 in the second half and brought the 1,472 in attendance to their feet with a two-handed slam.

“I was just waiting for it to happen,” Jones said. “It was my first dunk in a game. It was exciting.”

The Trojans (8-15, 3-9) trailed by nine at halftime and shot just 1-for-9 from three point range. Jones, who scored 18 points, gave the Trojans a jump start in the second half, shooting 4-5 from beyond the arc.

“When he came in, his intensity lifted us to another level,” said point guard Will Weathers, who finished with 12 points and six assists. “That really helped us pull out the win.”

The win was the first in four game. It also marked the 299th victory for head coach Don Maestri in Sartain Hall. Maestri and the Trojans will have one final attempt to reach the milestone as Sartain Hall hosts its final game on Feb. 18, when Arkansas-Little Rock visits Troy.