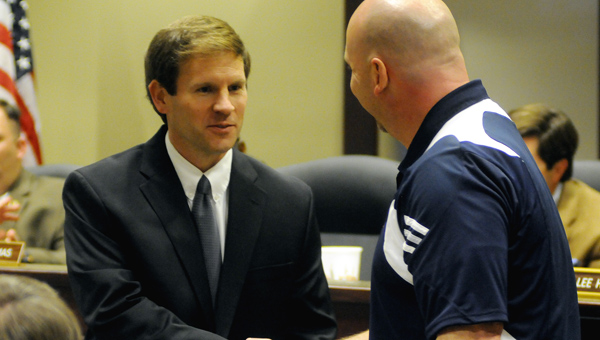 In Mike Dean’s interview, Troy City Schools Superintendent Lee Hicks asked him about his blueprint for success. Hicks, apparently, liked the floor plans Dean set forth. On Thursday, the Troy City Schools Board of Education approved the hire of Dean as the new athletic director and head football coach at Charles Henderson High School.

Dean comes to Charles Henderson from Valley High School where he posted a 9-3 record last season and a berth in the second round of the playoffs.

“I’m going to put more pressure on me than anyone,” Dean said. “6-6 isn’t good enough. I don’t like being average.”

The fear of being average is what drives Dean to hold not only himself but also his football teams to the highest possible standard –– that of a champion.

“We’re all here to be champions,” Dean said. “God put us on this Earth for a reason and it’s not to be average.”

Both Dean and Hicks expressed the desire to bring the blue AHSAA state championship trophy back to Troy. The lone state title won by the Trojans in football was in 1980.

Dean, after a decade as an assistant coach at four different schools, landed his first head coaching position at Daleville High School in 2008 where he led the Warhawks to a 9-4 record and into the Class 3A state quarterfinals.

The Auburn University graduate spent two seasons at McGill-Toolen in Mobile guiding that program to a 14-8 record before moving on to Valley High School. In his four seasons as a head coach, Dean has earned a record of 32-15.

“I coach every child as if they were my own,” Dean said. “I’m hard on them but at the end of the day I hug them, tell them I love them but I expect a lot from them.”

Each of the 70 candidates was asked 18 questions in an interview session, with some lasting over two hours. Hicks said he was impressed with Dean just minutes into their interview.

“He had me ready to run through a wall and play for him,” Hicks said with a smile. “He has a great energy and passion for the game.”

Dean says Charles Henderson caught his eye this past season after Valley defeated the Trojans 21-20 at Veterans Memorial Stadium.

“The players were upset,” Dean said. “You could tell they had pride and wanted to win. Failure was unacceptable. I knew that was the kind of program I wanted to be a part of.”

With him, Dean will bring a ‘win today’ philosophy.

“If you look at yesterday and feel like you’ve done enough, you’re going to lose today,” Dean said. “If you dwell on the past, you don’t see the great things in front of you.”

Dean replaces Hugh Fountain who retired last month after 16 seasons with the Trojans. Charles Henderson was 106-67 under Fountain making him, by far, the winningest coach in school history.

The Trojans finished last season 6-6, falling to St. Paul’s in the second round of the playoffs.

Dean will meet with students and faculty this morning and will begin work on Monday.

Valley head coach to be nominated for CHHS opening