Hannah happy about return to shortstop 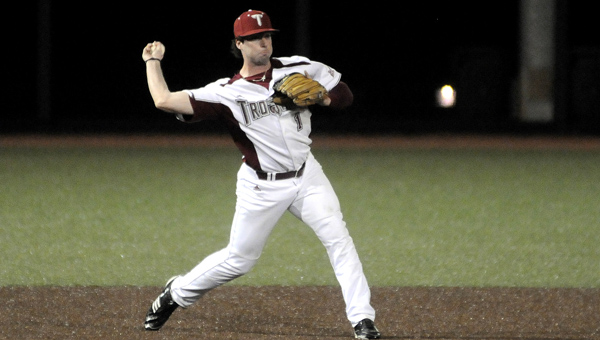 Replacing an All-American shortstop would normally be a daunting task for a coach. Troy head coach Bobby Pierce will simply pencil in a preseason All-American.

Though Tyler Hannah is technically making the move from third base to replace Adam Bryant, who graduated last season, he has always been a shortstop.

“It feels good to be back at shortstop,” Hannah said. “I feel back at home. That’s where I’ve played my entire life except for last year.”

As Troy’s starting third baseman, Hannah committed just five errors and finished with a .970 fielding percentage. Hannah, now a senior, accepted the move to third and didn’t seem to miss a beat.

“It’s still a ground ball,” he said. “Playing third was actually a little easier because you don’t have to cover as much ground.”

The 6-0, 195-pounder said the biggest challenge in returning to shortstop was working on fielding balls deep to each side of his body and that he was acclimated to the artificial playing surface after last season and didn’t feel like it would be an issue as he makes the transition.

“Third base it’s mostly reaction to the left or right,” Hannah said. “That’s mostly what I’m working on now. Making sure I play those deep balls correctly.”

Danny Collins, a sophomore transfer from Northwest Florida State College, will take over at third base for Hannah this season. Hannah says that Collins is comfortable with the position but is willing to give a pointer or two if needed.

“He asked me when he first got here where I liked to play on the turf,” Hannah said. “I let him do his own thing over there but if he asks, I’ll help him with what I used to do.”

Hannah helped led the Trojans to a 43-19 record and a berth in the NCAA Nashville Regional Tournament in 2011. Simply reaching a regional tournament is not the ultimate goal for Hannah or the Trojans, however.

“I think the team is hungry to get back out there and see how much further we can go,” Hannah said. “We want to win a regional and ultimately get to Omaha.”

Finishing second in the Sun Belt with a .370 batting average and third in the NCAA with 27 doubles will more times than not land a player on couple of postseason accolades. Hannah was named Louisville Slugger and American Baseball Coaches Association All-American as well as first team All-Sun Belt last season. That has led to several preseason honors this year. But compliments and tributes only make Hannah more motivated.

“When I hear those kinds of things, it make me work harder to have an even better season,” Hannah said. “The team is the same way, everyone wants to go further than we did last year.”

Hannah feels that Troy, who opens with Central Michigan on Feb. 17, is ready to kick off the 2012 season.

“Everybody is pumped and ready,” he said. “A lot of guys are tweeting the countdown until we start.”