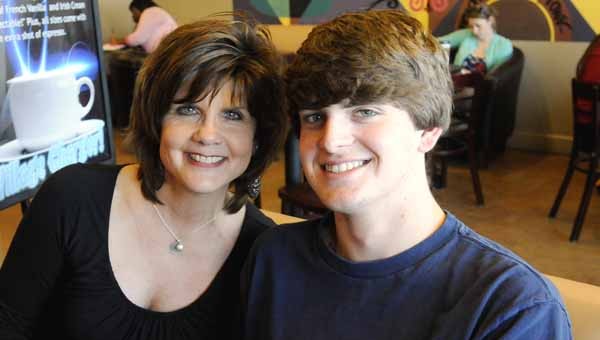 Three weeks after his father died of a heart condition, Kimball Stacey was diagnosed with his own heart problem.

“He was never sick a day in his life,” Denise Box said of her son, Kimball. “He passed his football physicals. He passed everything…and then his dad died.”

Box said her ex-husband had always been concerned about his heart health. Thurman Kimball Stacey, Sr. had two uncles who had heart attacks at an early age and his brother died in his sleep at 25. His nephew had a heart valve replacement at 23.

Thurman Kimball Stacey, Sr., 45, died at the hospital on April 3, 2009. He’d sought medical aid because of back pain and ultimately suffered an aortic dissection.

“His heart ripped open from top to bottom,” Box explained.

It was then that Box said she felt the need to travel with her son to the University of Alabama at Birmingham, with his father’s autopsy report in hand, to have his heart thoroughly examined.

A cardiologist performed an echocardiogram on Kimball and found that he had an enlarged aortic root. That means that the portion of the aorta connected to Kimball’s heart was being pulled of shape and could eventually leak from its weakened state.

Immediately, Kimball, then a linebacker on his football team, wasn’t allowed to play contact sports.

“At the time I didn’t know it was a big deal,” Kimball said.

“He wanted me to find another doctor who would let him play football,” Box added.

Kimball said he felt fine, so he didn’t worry much about his condition. He and Box traveled to Birmingham for six-month check-ups until October 2011.

“That’s when the doctor said that we needed to schedule a surgery at our earliest convenience,” Box said.

Kimball’s stepfather, Dan, and his two sisters and their families traveled to Birmingham to be with the 18-year-old Pike Liberal Arts School senior as he underwent a valve-sparing aortic root repair surgery at the beginning of December where a graft was put over his aortic valve to reinforce it.

Box said Kimball was probably more relaxed about the procedure than the rest of the family.

“I really didn’t get nervous about it until right there at the end,” Kimball confessed, adding that the description of his recovery and knowing he’d need to be on a ventilator was a little worrisome.

Doctors had said Kimball might not return to school for months after his surgery, but he bounced back quickly.

He was in surgery six hours, in intensive care a day and a half, and was back home in Troy on day five, his mother said.

After a week at home, Kimball “got bored” and decided to return to school to take his final exams before the Christmas break.

Full recovery, according to his doctors, will take about two and a half months, but his healing is off to a great start. When Kimball went back for an echocardiogram a week after his surgery, the doctor was pleasantly surprised.

“He said, ‘If I didn’t know any better, I wouldn’t know there had been anything wrong with him,’ ” Box said.

Box said she doesn’t want to unnecessarily scare people, but hopes to urge the community to have their hearts checked if there is a history of heart disease in their family.

“There was not one single thing wrong with him,” Box said of her son. “If not for his father, he might have dropped dead on the football field.”

These days, Kimball has switched his focus to life after high school. He said he will attend Troy University on an academic scholarship and hopes to study business, but that might change.

“I’ve got a little time to figure it out,” Kimball said with a smile.

Recently, Kimball spoke with middle school students during a Jump Rope for Heart program about his story. Although he’s a little shy about public speaking, Box said she plans for the both of them to reach out to the community whenever they can.

“Anything we can do to support the American Heart Association,” Box said. “That funding and that research is the only reason technology has come this far. The fact that you can stop a heart, work on it and start it up again is amazing.”

Box said, “We were blessed. Blessed.”