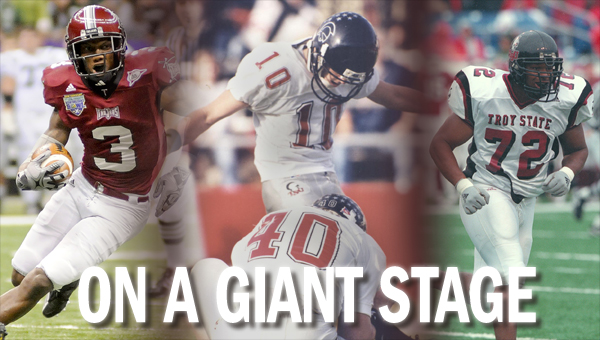 The same sweat, blood and tears that fell on the turf of Veterans Memorial Stadium on the campus of Troy University will soon fall on the artificial playing surface of Lucas Oil Stadium in Indianapolis. The feet that once tore divots and churned rubber pellets on the crossed Trojan swords at midfield of a 30,000 seat stadium in rural southeast Alabama will grip and cut across the Super Bowl XLVI insignia inside a 67,000 seat facility overlooking the downtown skyline of a major metropolis with millions tuning in to radio and television broadcasts around the world.

Defensive end Osi Umenyiora, kicker Lawrence Tynes and wide receiver Jerrel Jernigan have come a long way since their time in a place once known as Deer Stand Hill, Ala.

On Sunday, the trio, along with their New York Giants teammates, will face off against; arguably, the most dominate franchise of the past decade –– the New England Patriots.

In a rematch of Super Bowl XLII in 2008, the Giants look to again capture the Lombardi Trophy away from the Patriots.

Jernigan, who was drafted last season, is participating in his first Super Bowl. Tynes and Umenyiora both have rings from 2008.

Tynes is looking forward to enjoying his second trip to the “big game” more than the first.

“I told my wife, the last one was a blur. Let’s really enjoy this one,” he said at a Super Bowl press conference.

“I have taken a lot more pictures since I have been here. I walked around and felt the pulse of the city. It is really exciting. Last time I didn’t really get to do any of that.”

Tynes, 33, has come full circle from the time he started kicking in Milton, Fla. Tynes did not play football until his senior season of high school.

“My P.E. teacher was our defensive coordinator,” Tynes said. “They needed a kicker and he said, ‘Lawrence, can you come out here and kick?’ He knew I was a good soccer player. I went out for spring football and I haven’t stopped since.”

Tynes is currently third in the Troy history books for career field goals (44), and points (273).

“The bigger the game, the better he plays,” Blakeney said. “He’s a tough kid and a good kicker.”

“I missed seven games this season,” he said. “Watching us lose and struggle, I think that was the low (point in the season, personally).”

Though he wasn’t able to play a full season with his Trojan comrades, Umenyiora feels the school is well represented.

We have some very good players that come out of that school and I’m proud of the fact that we have this many players here.”

Jernigan has been seldom used as a rookie did not record any receiving statistics during the regular season but did return eight kicks for 186 yards.

“He hasn’t had much of a chance,” Blakeney said. “But he could do something special before it’s over.”

The Eufaula native was selected in the third round by the Giants and reeked havoc in the Sun Belt Conference as a Trojan. Jernigan accumulated 262 receptions and 3,128 receiving yards during his career.

“Jerrel was one of the most dynamic players we’ve ever had,” Blakeney said. “He could do a lot of things and was a guy defenses had to account for.”

With the world watching the annual spectacle on the gridiron, one town in Alabama will watch with an added and specific interest.

One college football coach specifically has a favorite in the game.

“We are mighty proud of them,” Blakeney said. “It’s phenomenal to have those three guys on the same team. I’m a huge Giants fan, especially this week.”