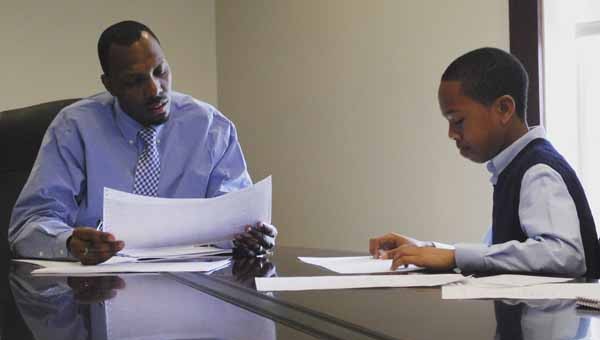 Punxsutawney Phil may not have had a shadow on Thursday, but community and business leaders all over the area did.

Jaron Knox, 14, sat next to his mentor for the day surrounded by budget paperwork Thursday morning. Knox chose to spend the time with Chresal Threadgill, Troy City Schools assistant superintendent.

“We’ve gone to the schools today, and now we are going over spreadsheets,” Knox said, dressed smartly in a button-up shirt and sweater vest because he said he thought it was more “appropriate” for the central office.

Knox said he had more of an understanding of what it takes to do Threadgill’s job now that he’d spent half a day with him.

“I just thought he went around and told teachers what they needed to do. But it’s so much more,” Knox said looking over the spreadsheets. “There’s a lot of paperwork.”

Threadgill said, although he doesn’t have typical days, Knox was able to experience what the reality of his job is.

“Usually I try to visit the schools on a daily basis to see how everyone is and if they need anything,” Threadgill said. “I also do a lot of budgeting of federal dollars.”

Threadgill said Knox had been a good helper.

Knox said when he grew up, he’d like to own his own business, perhaps selling sports products, but he wanted to hang out with the assistant superintendent because he’s a great role model.

“He teaches you to do right and to get an education,” Knox said.

Threadgill mentioned he backed the job shadow program because it was a good opportunity for students to see behind the scenes of a career.

Bailee Mabray, 14, and Aminah Muhammad, 13, both spent the day at Troy Animal Clinic.

“I like being around animals and I’ve wanted to be a veterinarian for a long time,” Mabray said.

“There’s no way to explain it,” Muhammad said. “Animals just make me smile.”

Both girls were able to watch surgeries and exams throughout the day.

“This gives them a real idea of what truly goes on in an animal hospital,” said Dr. Steve Barron. “There are good days and bad days, and happy moments and sad moments.”

Mabray and Muhammad said the experience strengthened their desires to become vets. Both said they hope to be students at Auburn University after high school.

Lindsay Lee, 13, is the only female member of the golf team at Charles Henderson High School. Her love of the sport prompted her to ask Troy Country Club Golf Pro Tony Mitchell if she could shadow him for the day.

“I didn’t have to think about what I wanted to do today,” Lee said. “I love golf. It’s peaceful, quiet and you don’t have a coach yelling in your ear.”

Mitchell took Lee on the rounds with him to check the water on the course and cut the greens.

“It’s different,” Lee said. “I though it would just be relaxed, but it’s very busy.”

Mitchell said Lee was a quick study and had already learned to program radios to turn different watering systems on and off.

“She picked up on everything so fast,” Mitchell said. “She even had to use some problem solving skills earlier.”

Mitchell explained he’d tasked Lee with deciding the amount of chemicals needed for some of the lawn care.

Lee said she would either like to play golf professionally, or be a pediatric nurse, one day.

“I was very happy to have her with me today,” Mitchell said.

When Alabama First Lady Dianne Bentley accepted the invitation to visit Troy on Wednesday, she didn’t realize that her visit... read more